The new unlimited upload function in Google Photos is undeniably generous. But the old saying that your mother taught you, "if something seems too good to be true, it probably is," would seem to be in effect. Android Police has received reports from multiple users that photo uploads from the desktop and various mobile apps have hard data restrictions, suddenly cutting out in the middle of the upload process after users pass an unspecified data threshold. That's kind of the opposite of "unlimited."

All over Google+, reports are essentially the same: user uploads a huge amount of photos, user's upload stops, user has to either wait or pay for extra Google Drive storage to upload more. One reader wrote us directly with his experience:

i've been uploading my entire photo library to the new google photos over the past couple of weeks and uncovered something really annoying. have ~70k photos and wanted to upload them all using the unlimited storage option (high quality) using the desktop uploader application. got about 20k in when it just suddenly stopped uploading. funny thing is, it stopped uploading/backing up ANY photos on ALL my devices, pc, laptop, phone, tablet, etc. anything tied to my google account will no longer backup any photos.

Android Police hasn't been able to independently verify this data cap, but there are enough users reporting similar experiences that it's very difficult to see any reasonable alternative explanation. Users aren't being given any visible acknowledgement of hitting a limit, or any instructions on how to continue using the service once they hit it.

This invisible limit seems to be based on data usage, not on the number of photos, like the publicly posted limit in Google's free music storage. We've been unable to find any terms of service for Google Photos that acknowledges any timed limit since the "unlimited" policy was put into place, though the outdated Picasa Web Albums may have a similar limit, as noted in this user-written guide. When users hit this point, they may no longer be able to share photos or video in Hangouts until the unspecified block is lifted, perhaps after a month. 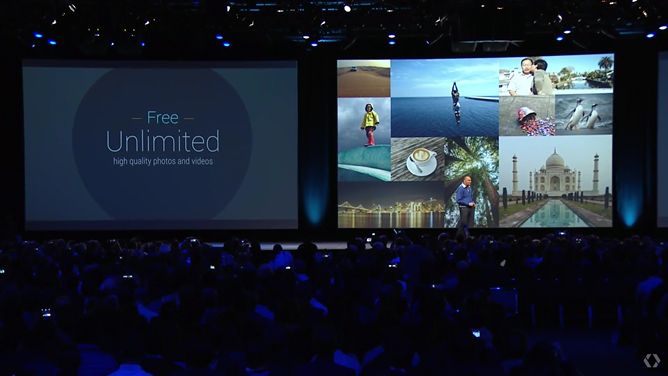 Our tipster tried paying for the premium storage option in Google Drive, which apparently lifted this temporary limit... at least until he needed to pay for more storage. His experience has been mirrored by other users.

if you move to a paid google drive storage tier they remove (or more likely raise) the cap. for the hell of it i tried this. used free storage to upload my photos, hit the cap, went to the 100GB/$1.99 tier and just like that, my photos began uploading again. last night i hit this "cap" again and moved to the 1TB/$9.99 tier. voila, photos are now uploading again.

Let's be clear: we don't object to Google putting reasonable restrictions in place on a free unlimited service - even the company's seemingly limitless data and bandwidth doesn't come for free. This sort of thing does have some disturbing parallels to Sprint's recent (stupid) video streaming restrictions on unlimited data plans. The difference is that Sprint customers are paying for "unlimited" service, and therefore can reasonably expect a service that truly has no limits on data. Google's free photo uploads aren't paid, so data caps can at least be justified.

That said, Google needs to tell users that there is a limit to the amount of photos they can upload in a month, or whatever the time limit actually is - right now we just don't know. Google has a pretty terrible reputation of communicating with its customers/users, and this isn't helping. An outline of the "fair use" data policy, and users' paid options to exceed it (temporarily or otherwise), is needed.

A Google representative reached out to us to say that "we have since fixed the issue." While the representative didn't elaborate on whether it was a technical error or a data cap, they did say that "users should no longer be experiencing any upload issues. "