Earlier this week we spotted a new Google Voice Actions / "OK Google" feature - it's called preferred apps. The idea behind it is wonderful: if you use a particular voice action that maps to multiple apps on your phone, you can pick one, and from then on, Google will launch the activity in that app by default. It's simple and brilliant and I love it. Well, I would if Google's implementation was a bit more... working. First, here's what it [should] look like. 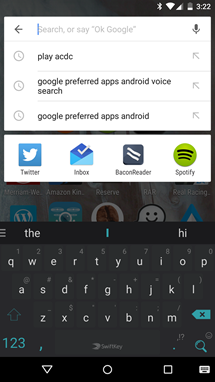 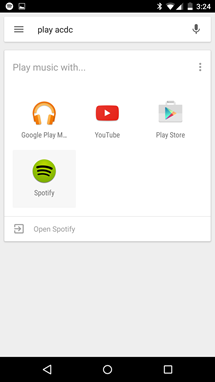 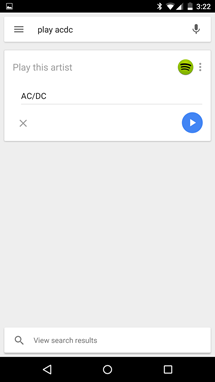 Basically, you enter a command such as "play acdc," and then Google gives you the list of apps that can do that action in a little grid, assuming multiple apps on your device can complete the action. You pick one, then you hit the little "play" button to launch the app with the specified command. What preferred apps does is the next time you give this type of command, the app you chose will launch by default. This last bit is also specifically the new part. Here's what Google says about it:

Google learns some of your preferred apps

For some of these voice actions, when you don’t mention the app name in your request (for example, you only say “scan my receipt”), you’ll see a card in the search results with a button that will allow you to launch the app. If you request this action several times and tap the button each time, Google will learn that you prefer launching the app and will not ask you again.

If you prefer to be asked each time before launching the app:

The app will no longer launch automatically, and will appear in search results again, in some cases after a few minutes.

As far as how specific it gets, well, it's understandably not super particular because that would get annoying. If you say "play <band x>," it's just going to understand that as a generic music play command, and it will open the music app you previously selected regardless of the particular content you've asked for. Other uses include things like apps that scan receipts, as per Google's documentation of the feature.

Google's documentation also claims that you can cancel the default app for a given action at any time simply by pressing the "X" in the dialogue that comes up, but you'll have to do it "a few times" before the default association clears. Additionally, as far as I can tell, If you hit the "X" and pick another app even once, it will then become the default app for the action. And if you launch the action via voice commands, it doesn't work at all, because the "X" doesn't appear and the activity simply completes with the last-used or default app.

So, hopefully Google will address some of these usability issues, because this feature is awesome and I want it to work. For now, Google's support site says preferred apps is available in English in the US, UK, Australia, Canada, India, Ireland, Singapore, and South Africa. Additionally, you'll need the 4.0+ version of the Google app and web & app activity checked in the app settings to enable this feature.

Are Your Hangouts / SMS / Google Voices Messages Coming Unmerged? Google Is Working On Fixing That