Skin tone emojis have been a staple of WhatsApp's iOS application for a long time and have recently made an official appearance on the Unicode's version 8 update. However, if you were using Android, you could only view these emojis if they were sent by your peers (as of the app's Material update) or use WhatsApp Web to send them. There was no way to pick a skin tone modifier if you were chatting away from your phone.

That changes with WhatsApp's latest beta (either 2.12.159 or 2.12.161 will do). When you go to add an emoji inside the app, if you scroll down past the regular facial expressions to the emojis with human elements like people, hand gestures, and some activities, you'll see that most of these have a little triangle at the bottom, to denote more options. Tap one of them and you get the now familiar choice of skin tone modifiers including yellow and five gradual shades from milk white to chocolate brown. Once you pick a tone, it becomes the default for this particular emoji. From then on, a regular tap will insert the emoji in the skin tone you chose, and a tap-and-hold will bring back the selector to change it. 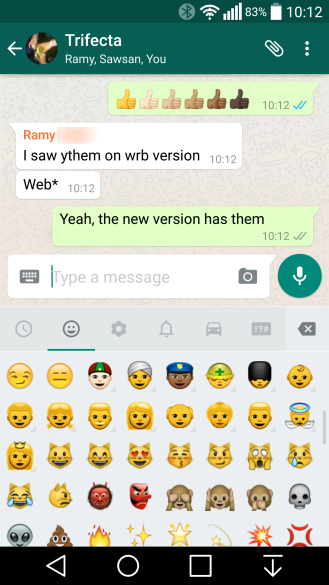 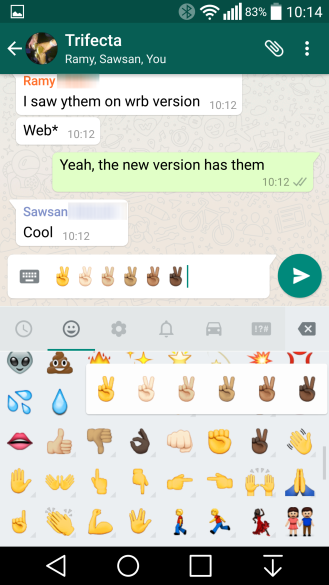 Notice the Spock gesture in the right screenshot (bottom row, toward the middle)

Also worth noting is the new Vulcan Salute emoji (that's the Spock hand in layman's terms) that appears at the end of the gestures. This particular sign was added by Apple in iOS 8.3, but it was hidden and required some shenanigans for people to use it. WhatsApp brought it to Android and made it visible and accessible to all, because... 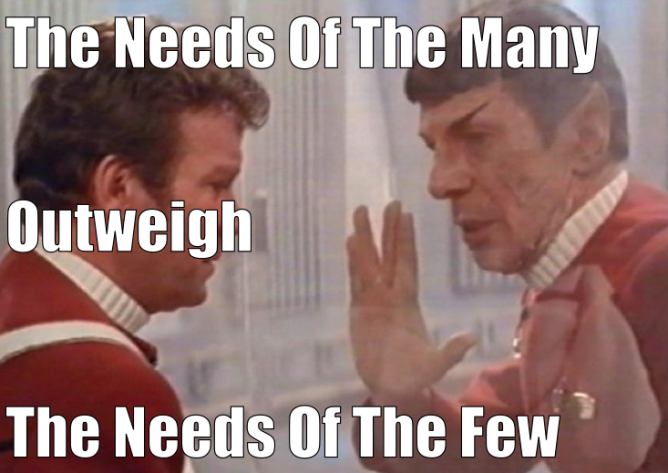 Droid Turbo Android 5.1 Soak Test Is Rolling Out, Could Be Final Later This Week

The European Commission Reaches An Agreement To End Roaming Charges In June 2017 And Guarantee ...