It's only been a few days since we heard of the soak test, but it looks like it's been successful enough for Motorola and Verizon to fast track the latest Moto X 2014 update. Verizon announced the Android 5.1 over-the-air update in its usual way, so at least some users should see the update alert by the end of the day. The rest of you will be waiting for up to a week or more, unless you manage to track down the OTA ZIP file from a user forum. 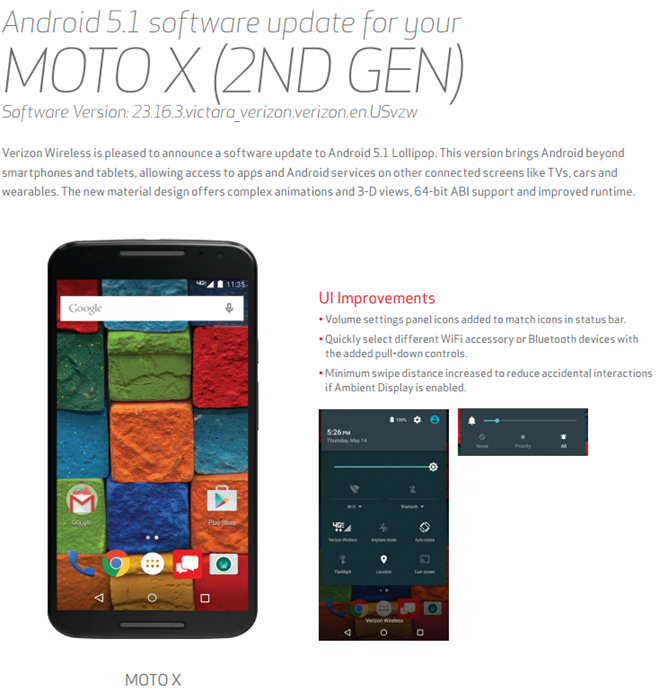 According to the update information, there isn't much on top of Android 5.1 that's notable - not surprising, since Motorola's software builds tend to add only a few features on top of stock AOSP and Google functions. The only exception is the addition of factory reset protection, and Android 5.0 feature that oddly wasn't included in the Moto X's Lollipop update - the same thing happened to a few other phones.

Verizon continues its plodding locked bootloader policy, so it's unlikely that too many people have modified the Verizon version of the Moto X (especially since the Nexus 6 works on the network), but if you have, the update won't flash. We don't know how big the 5.1.1 update will be, but it's probably a doozy - you'll want to hop onto Wi-Fi when you get the notification.

Droid Turbo Android 5.1 Soak Test Is Rolling Out, Could Be Final Later This Week