Gone to wallet.google.com recently? Notice anything... missing? Like most mentions of "Wallet"? If so, you're not the only one! In fact, if you go to payments.google.com, the same page launches. And if you go to your settings on that page, there is a hilariously confusing mix of references to both Google Wallet and Google Payments. For example: there's a toggle box for accepting Google Wallet to receive commercial transactions. Yet there is also an option to set your Google Payments PIN, which is clearly the new name for your Wallet PIN, as well as an option to receive special offers from Google Payments (which were previously special offers from Wallet). The Wallet (or Payments!) site itself also doesn't have any Wallet branding anymore aside from areas where Wallet is explicitly referred to, like the Wallet balance, and there's even a full Google Payments support portal now.

This is, obviously, confusing. Here's our theory.

Wallet still exists, because it's an Android app for tap & pay and you can store a Wallet balance to use Wallet-only features (... like tap & pay). Wallet also allows you to send money to other Wallet users, but presumably this is a Wallet feature only because the money being transferred goes into the receiving party's Wallet balance and Google doesn't want to rename that to something else.

If this sounds terribly confusing and vague, don't worry: it is. It's clear even Google doesn't understand what its payment products really are or what they're supposed to do, because we're up to god damn four of them: Google Wallet, Google Payments, Android Pay, and Google Hands Free. All of these things do slightly different things, but all of them also serve the same basic purpose of transacting with a third party using fiat currency. In order to help you understand the new hierarchy, I've constructed a helpful flow chart. 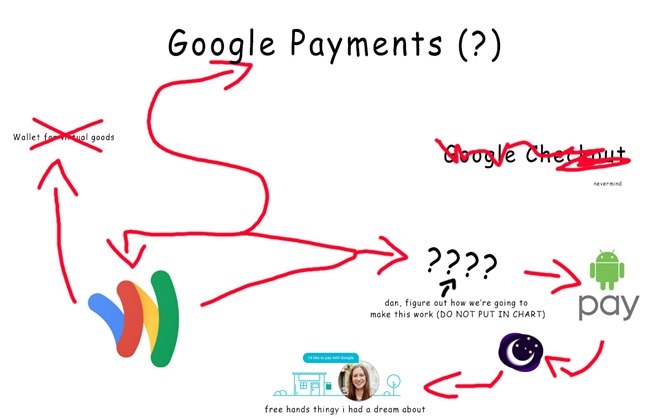 We've reached out to Google for clarity on the changes, and will update this article if and when we receive a frustratingly unclear response.

Google has confirmed to us that Wallet will be re-branded primarily as a money transfer service, and will no longer process in-app or online payments, and that Google Payments will pick up the management and overview aspects of Wallet's functionality. It was also implied that Android Pay will replace Wallet on Android devices for tap & pay and other purchase functionality. So yes, this is all still needlessly confusing.

Xenowerk Is A Top-Down Shooter That's Crawling With Slimy Mutants