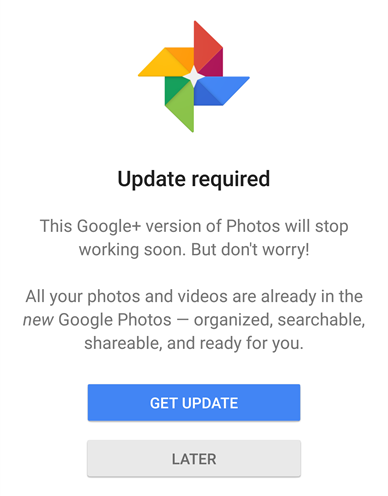 This Google+ version of Photos will stop working soon. But don't worry!

All your photos and videos are already in the new Google Photos — organized, searchable, shareable, and ready for you.

Since many users have already made the switch, they can look forward to Google+ going on a diet. The app stands to lose about 20% of its weight (that's an estimate) after the old Photos functionality is stripped away.

For those that have abstained from the new Photos app for the sake of keeping the editing features of Google+, it's probably time to move on. Fortunately, there's already a perfect replacement from Google available in the Play Store: Snapseed. Many may have forgotten Snapseed since it was acquired by Google back in 2012, but it was the precursor for both the interface and functions that exist today in Google+ Photos. Updates have been a bit sparse, but a big jump to v2.0 came out just a few weeks ago, suggesting that Google is planning to keep it maintained for some time to come.

As a final note: there are a few devices (possibly just the Nexus 5, 6, and 9) that shipped without the stock gallery app. These handsets (and tablet) used Google+ Photos exclusively. While our readers will have no trouble installing the new Photos app or finding a 3rd-party alternative (like QuickPic), we know some of you have also encouraged family members and friends to use the same devices, and some of them may be confused by losing the only gallery app they know. Just a suggestion, you might want to get in touch in the next few weeks to help them get squared away.