Circa News launched on Android in late 2013, and right from the start it was a neat way to keep up on the day's events. However, CEO and co-founder Matt Galligan has announced via Medium that Circa is shutting down its news operation. The company is low on cash and has yet to figure out how to monetize, so that's the end. 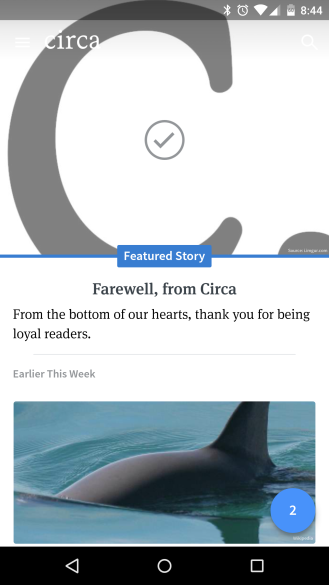 Circa wasn't only a news aggregator. It employed editors whose job it was to find the most important stories and create effective summaries that you could read more easily on your phone. If you wanted more information, everything was cited with the appropriate sources. The app itself was great—it was fast, well-designed, and had Android Wear support. Galligan didn't say what would happen to the app, but I assume it will be unpublished.

The company was looking for investment capital to get it to a point that monetization was possible, but that didn't work out. Apparently generic banner ads or a subscription model were rejected as possible solutions. While the news product is ending, it sounds like the company lives on for now and might try to sell or license Circa's technology to some other entity.

Geometry Wars 3: Dimensions Available Now On The Play Store For 4.99 With No IAPs