Looking for a quick and easy way to set someone up with a smartphone? Then head over to Groupon, which is currently offering an impressive entry-level bundle for just a Benjamin. The current deal offers the original Moto E (2013), a SOL portable Bluetooth speaker, and a Tracfone SIM card with 1200 minutes for $94.99. Is that still not enough for you? Fine, take a car charger as well. 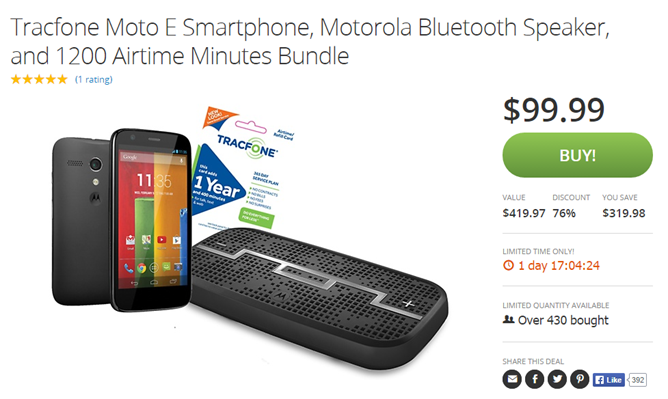 The "full" price is $99.99, but add the coupon "GOODS5" at checkout for an extra five bucks off. Groupon claims that the bundle is worth $420 at retail, which is a little generous; I count $90 for the first-gen Moto E at current rates, about $50 for the SOL Republic speaker (according to Amazon), approximately $180 worth of Tracfone airtime, and maybe $15 for the car charger, for a total of $335. That still makes this a pretty great deal if you're in the market for a quality low-end smartphone, some accessories, and a cheap calling plan.

The Moto E can only handle 3G data, but that's probably OK, since Tracfone plans don't come with any data by default - you'll have to buy gigabytes as separate cards and add them to your account, or just stick to Wi-Fi. Groupon's deal is available to the US (minus Alaska, Hawaii, and Puerto Rico) for the rest of the day.