Almost two years ago, I backed the iblazr project on Kickstarter. It promised an external flash for my phone that connected via the 3.5mm plug and brightened photos more than the built-in LED ever could. The project was successful, the company delivered quite on time, and the final product was good. However, as with any first-gen item, there were flaws and issues with the iblazr. Most importantly, the Android app was never up to par and the 3.5mm connection meant that on phones where the plug was on the bottom, you had your light angled wrong compared to your camera (which is usually on the top).

I eventually ended up using my iblazr almost as second flashlight, keeping the light on, holding it with one hand, and opening my LG G2/G3's regular camera app to take the photo. It wasn't practical, but it caused me to tinker with lighting sources and angles, and it garnered my friends' surprise, "Oh, it's like your own studio light in your hand."

The iblazr team is back for the second attempt and it seems like they have ironed out all the quirks. No more 3.5mm shindigs, the iblazr 2 connects via Bluetooth to your phone (Android or iOS). Even better, it doesn't need its own app (although it has a cool Shotlight app with plenty of options) because it works with the built-in camera of your phone. Once it's connected via Bluetooth, you simply double tap the iblazr 2 — yes, it's touch sensitive — and it will beam a light and trigger your camera's shutter synchronously.

But let's talk about the actual light for a bit. There are four LEDs inside the iblazr 2, capable of emitting 300 Lux at 1m (the team says that's double a regular smartphone's LED), and with adjustable temperatures from 3200K (warm) to 5600K (cold). The battery lasts for 300 flashes or up to 3 hours of continuous lighting if you're filming videos.

The iblazr 2 comes with a mount clip that accommodates phones between 0.24" and 0.37" thick (6mm and 9.5mm) and a cold shoe mount for DSLRs. But due to the wireless nature of the flash, you can use it without mounting it to your camera, thus playing with lighting angles. It also has a silicon diffuser that softens the light, a MicroUSB charging cable, and a key clasp. 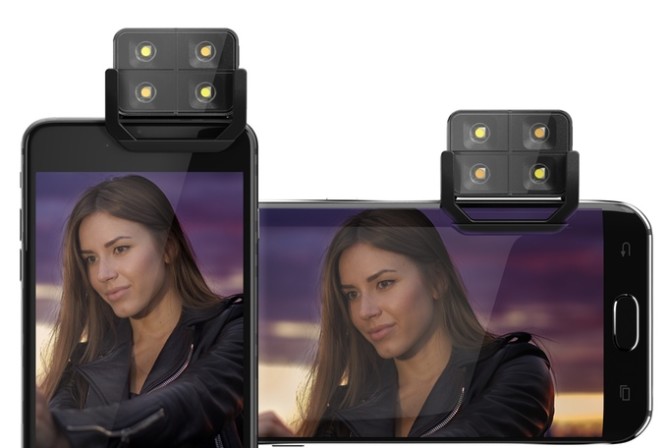 The iblazr team was looking for $70000 in funding and it already reached that with 24 days to spare. Early bird specials are still available, with the entire package selling for $45 (with $5 shipping in some countries). You get your choice of black, grey, or white iblazr 2, and the expected delivery date is September 2015. But if you're feeling the photography bug, you can grab more units and luckily the Shotlight app will let you synchronize them all so you can get as creative as you want.