It's Father's Day. If you have a dad and you appreciate him, go have lunch with him. If he's too far away, call him on the phone, like people used to do before things like touchscreens and smartwatches and Taylor Swift. Don't send him a text message or IM that says "Happy Father's Day" - that's just so tacky. It's the communication equivalent of a last-minute drug store gift card.

If you decide to ignore this advice, and you send Dad a "Happy Father's Day" message through Hangouts, Google won't judge you as harshly as I will. In fact, they'll actually reward you with a series of custom animations, as is their wont for wide-reaching holidays lately. Most of them are suitably adorable, with the best probably being the lion hugging its cub, Mufasa style. 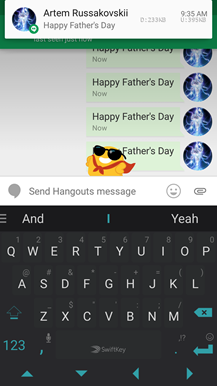 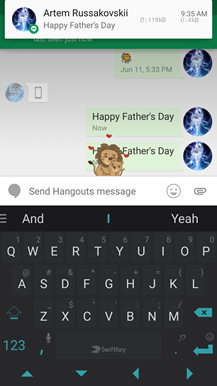 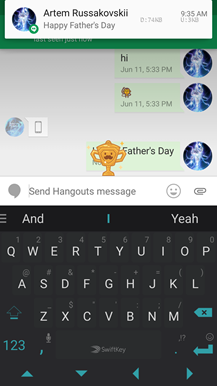 Yes, that's our boss Artem saying "Happy Father's Day" to himself. As a mighty Protoss Archon, he is in fact his own father.

These animations will show up on the Android version of Hangouts as well as the desktop Chrome version. They will almost certainly dissapear tomorrow, because even Google isn't going to put up with you if you send that message too late.

No, Google Won't Enable Ticker Text If You Disable Heads Up Notifications (Peeking) In The ...