Google Fit is, like most things Google publishes on the Play Store, popular by necessity. The fitness and activity tracking service debuted around the time Android 5.0 did, and people were understandably excited. After all, a built-in fitness and activity tracker app only makes sense on a smartphone full of sensors, and Google is well-renowned for its number-crunching and algorithm-refining prowess. But reviews of the Google Fit app on the Play Store are pretty brutal. 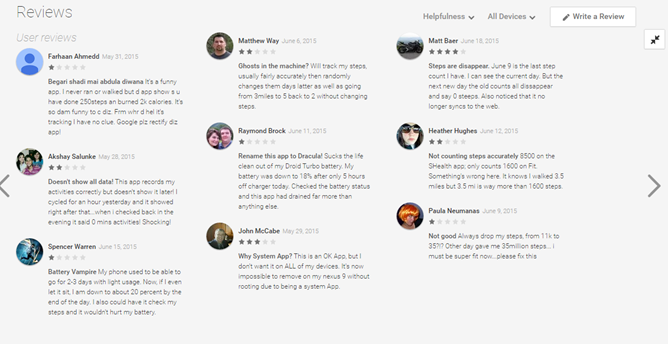 While the app maintains a 4.0 overall rating, even Google's polarizing Inbox app manages a 4.2, and it's clear that many users of Fit are having significant battery drain issues since installing the app. Additionally, step count and activity tracking seem to vary wildly in terms of accuracy depending on your device. Now, this isn't hard to believe, especially when you're talking about older phones - gyroscopes and accelerometers do wear out or break, and not every device is going to have the ideal set of hardware for accurate tracking using Google's algorithms. And as to battery life, well, Android.

I personally find Fit is very hit or miss depending on your phone. On The ZenFone 2, my step count is substantially less accurate than my Nexus 6 for some reason (over-counting), and that's not the only phone I've encountered this issue with. I also find that my step counts are generally more accurate if I'm using both my Wear device and a connected phone to track my activity - the watch or phone alone tend to be much more... liberal in their measurements.

So, we're curious: first, do you use Google Fit (that's the poll)? Second, do you like it? Having problems? Let's talk about it.

The Moto X 2013 Android 5.1 OTA Update Is Starting: US And Brazilian Unlocked Models Plus ...