You may remember Google posted a new kind of app promotion last week. It offered a PBS Kids app that was usually $3 for free, which is kind of a big deal for the Play Store. Developers cannot currently make a listing free then go back to paid. It looks like Google is going to continue doing this for a bit, as there's a new free app of the week—Toca Hair Salon 2. This would be great if only the redemption process wasn't so jacked up. 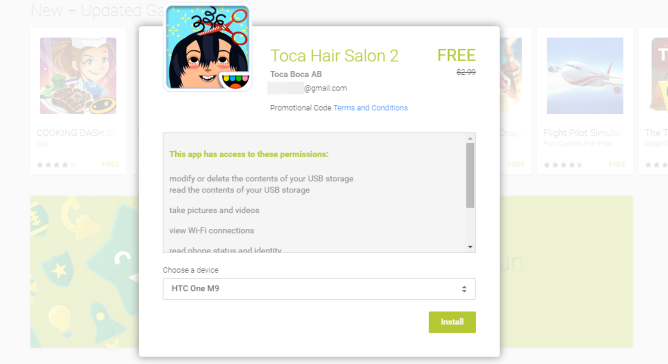 Toca Hair Salon 2 is an app aimed at kids, just like the last one. The promotion appears in the Family section of the Play Store as well. I guess you style hair in it, or something? Doesn't matter. That's not the point. If Google is going to keep offering these free apps, someone might want to fix the download process. If you click the free app banner, you don't go to the app listing. It just pulls up the installation dialog, which offers no information on the game aside from the name. Going to the app's listing manually doesn't offer the game for free either.

Google hasn't announced any changes to the way developers can price apps yet, nor has it explained what the weekly free app promotion is all about. Is this a permanent thing? Will we see more of these that aren't aimed at kids? Either way, go get your free copy of Toca Hair Salon 2, if you're into that sort of thing.