A recent post from @Upleaks claimed that ads were coming to HTC BlinkFeed, but the company had nothing to say at the time. Today it's official—BlinkFeed will have native ads as part of a pilot program in the US, UK, Germany, Taiwan, and China. If you're bummed about that, it's not the end of the world. You will be able to opt out. 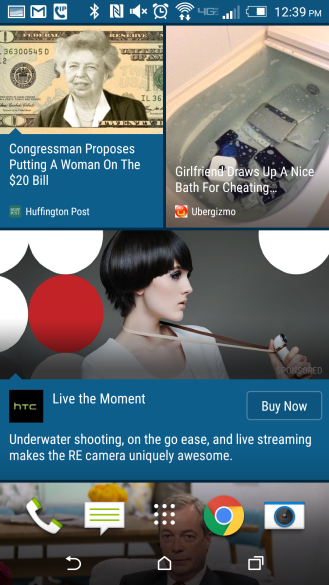 According to HTC, the ads will show up within the feed using all the proper formatting. They won't be banners or popups that wreck the experience. These ads will be marked as such and will include content from Yahoo, Twitter, Appia, and HTC itself. This is apparently starting today, but there's no update in the Play Store yet. That indicates the change is server side and will probably be rolled out to devices gradually (I'm not seeing anything yet).

These "native promotions" are just a test right now. They might not stick around, but I'm sure HTC would love to monetize BlinkFeed considering the poor sales performance of the M9 so far. If you don't want to see these ads, there will apparently be an opt out. HTC says, "We will be implementing a way for you to opt out." So maybe that means it's happening in the future? If it's not available right away, I predict lots of complaints.

Vessel Comes To Android With A Subscription Service Offering Early Access To Short Videos That ...

File Expert Goes Material And More In Update To Version 7.0