According to Saygus, the delay is due to problems with the manufacturer that was supposed to be physically producing the phone. The unnamed manufacturer apparently wasn't meeting Saygus' "stringent quality requirements." Fair enough, but in the process of finding a new manufacturing partner, Saygus has also added a second SIM card slot and plans to launch with Android 5.1 instead of KitKat. Yay? Don't get too excited.

The Indiegogo campaign seems like a way to squeeze just a little more money out of the Android faithful to cover these new costs. $600 gets you the phone, but it looks like over 1,400 people magically pledged money the instant the campaign went live. I'm sure there are some people who really want this phone, but more than $850,000 in the blink of an eye? When you look at the list of funders, it's clear what's going on. Indiegogo allowed Saygus to back-load the campaign with existing pre-orders. There are over 1400 "Anonymous" contributions from two days ago, long before the campaign launched. This strikes me as incredibly deceptive as it makes the campaign look much more popular than it is. 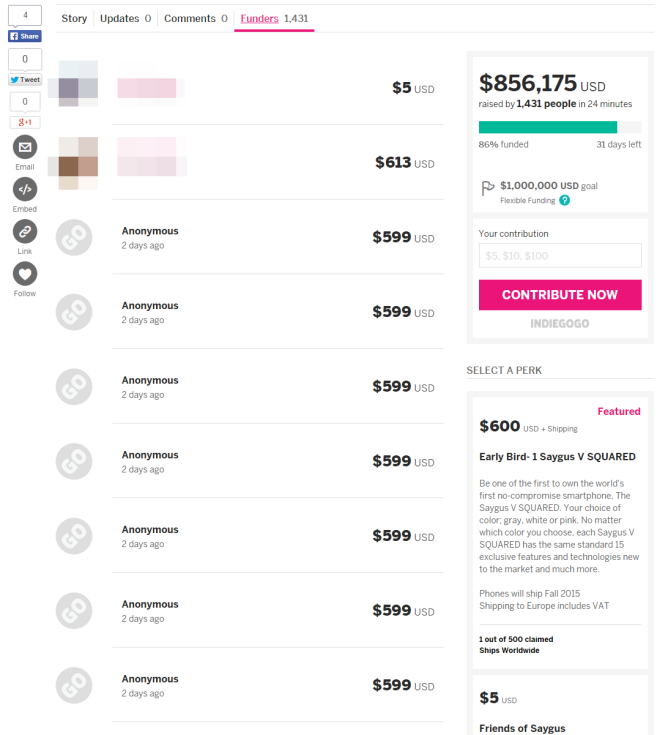 This is not okay.

For what it's worth, Saygus is looking for $1 million on Indiegogo, but it's flexible funding. Considering the shady "pledges" already got them north of $850k, I'm sure they'll hit the goal in the next 31 days. However, if this is the kind of chicanery Saygus has been reduced to, do you really trust them not to screw this up?

Saygus also says on its Twitter page the phone will have USB Type C and that pre-ordered phones will be shipped before IGG orders. Apparently those phones are already being assembled.