About three weeks ago the beta version of Opera for Android added a handful of new features. Today most of them graduate to the standard version, marked as v30.0.1856 on my phone. The biggest change (at least according to Opera's official blog) is that the sites saved to the "speed dial" homepage will sync across Android and desktop versions of Opera. That's provided, of course, that you're logged into your Opera account on all devices. If you prefer different Speed Dial options for mobile and desktop, that's an option too. 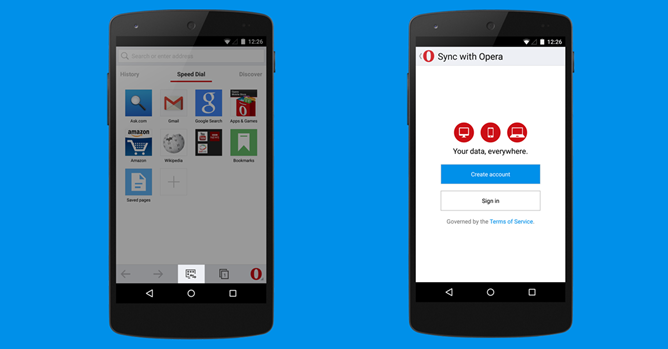 Perhaps more notable from a technical standpoint is an upgrade to the Chromium 43 rendering engine. That won't change much from a user interface standpoint, but it should improve speed and stability, especially when paired with the usual "stability and usability improvements." Opera now uses Android's native text selection function, which should make for less confusing copying and pasting between apps.

Other additions to the changelog include a new standardized context menu options and minor changes to the video control user interface. Opera is a free download for just about all Android devices, and if for some reason you need it on something without Play Store access, Opera hosts the APK on its website as well. The app isn't using a staged rollout, so no need to check APK Mirror.