At an event in Paris, Google apparently showed off a brand-new feature of the search app that is aware of your current location in relation to your queries. Google calls this Location Aware Search, or geocontextual search if you want to get technical. Basically, this allows you to ask questions without specifying an address or proper place name and still get information if you're near said place. 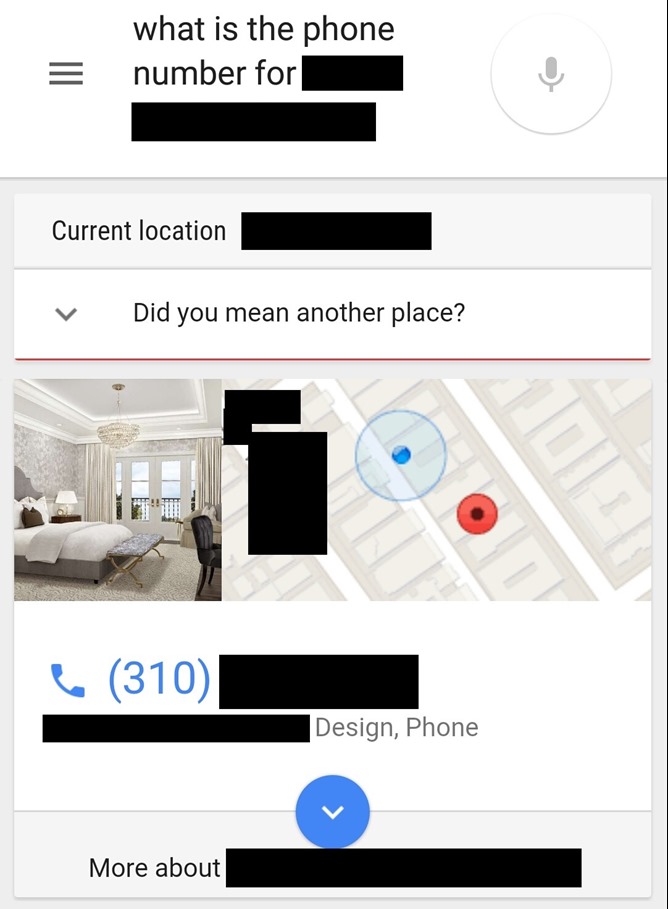 Sorry for all the blacking out - but my query was "What is the phone number for this place?" and this is what I was shown.

For example, if you're at the Louvre in Paris and you ask Google, "When was this building built?" it's going to tell you that the Louvre Palace was built in the late 12th century, presumably. You could also ask, while standing next to the Tower of Pisa, "How tall is this?" and Google will, again in theory, say "183 feet / 56 meters." This is obviously awesome. Known examples of how you can use this geocontextual feature are as follows:

I tried the "what's the phone number of this place?" command, and while I'm at home, Google did at least try to guess I was asking about a nearby business marked in Google Maps and provided the phone number. But if I tried something you'd think would be even simpler - "What is the address of this place?" - it gave me nada. So, this may not be 100% finished just yet. But it's very cool regardless.

Location Aware Search is live unannounced feature in Google Search App. Ask about things nearby without naming them pic.twitter.com/ML7APC6Msc

Users on Reddit confirm the feature is working in at least one non-US country as well. We don't have all the details on this one just yet, but if you want to try it out and see just what it's capable of, feel free to let us know how it works in the comments.