Sprinkled inside the big M letter slide during Google I/O was a list of new features on the platform, most of which we have discussed (and some of which we are still to discuss) in our M Feature Spotlight articles. One of these was a mysterious "Undo/Redo keyboard shortcuts" that you can spot in the seventh line on the left in the image below. 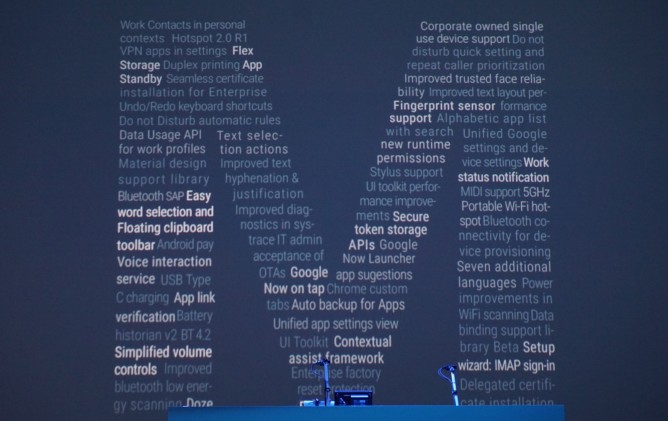 After stumbling to figure out what this exactly was, we reached out to Dave Burke who explained that M now supports the CTRL+Z and CTRL+Shift+Z shortcuts in text fields in Android M. That is if you happen to be using a Bluetooth keyboard with your device. From our tests, it seems that the feature is a bit hit-and-miss on the M preview, and has a short window of time where you can trigger it, then nothing happens if you wait longer and try it.

You won't have access to the feature on your device directly, which is a bit of a shame, but most good Android text applications (like Jotterpad, which I am using to write this article) do have their own undo/redo options in the app and have supported these keyboard shortcuts for a while. It's good to see the functionality becoming native though, and in all text fields. However, I hope it grows into a staple on the device (maybe in Google Keyboard?) instead of requiring a Bluetooth keyboard, because you're usually left to dry if you want to revert a text change in messaging and social applications.

Square Enix' Hitman: Sniper Zeroes In On The Play Store And Takes A Covert Shot At Your Free Time