The Google Keyboard has been updated to v4.1, and it brings a few handy new features. At the same time, several options have been removed. Google giveth and Google taketh away. One of the additions is cross-device dictionary sync, so maybe you can forgive Google on this one. 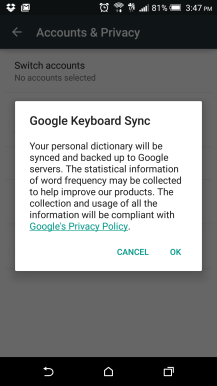 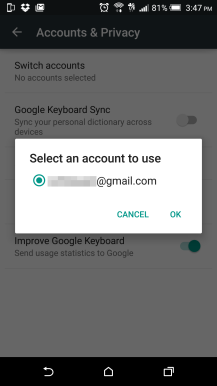 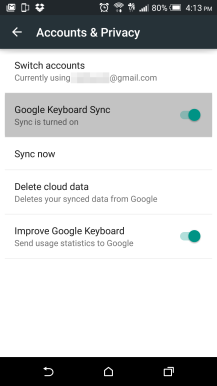 We're still poking around to see if there's anything else new, but this looks like all the big stuff. The dictionary sync is controlled by a single toggle in the new Accounts and Privacy menu. Just turn it on, pick your account, and the custom words you add should be synced to all your devices. It looks like this might just be exposing an option within the keyboard app that was buried someplace deep in Google's account settings before. The point is, it's available now.

The emoji option is good for those who use a wireless keyboard with Android. The Alt key will switch to the emoji panel so you can select them with the arrow keys. You'll have to work a little harder to type with gesture input now, though. The gesture settings no longer allow you to enable "phrase" swiping. That was the feature where you'd drag down to the space bar to indicate the end of a word, then go on to the next one. Now you have to do them all individually. Phrase swiping never worked all that well, so maybe it's no big loss.

You can grab the new update on APK Mirror as usual. Let us know if you spot anything else new.