There are multiple ways to stream high-end games to your Android device. There's NVIDIA's GRID,  (edit: Oh, right, Sony bought OnLive), and something thrown together by a guy on the XDA Developers forum. Maybe you want more options. Well, if you own an Amazon Fire TV, you can now add GameFly to this list.

The GameFly streaming service derives from the company's acquisition of Playcast. A look at the latter's website gives you an idea of what you can expect from the experience, as the interface matches the one Amazon has shown off alongside the GameFly Streaming app already uploaded to its app store. 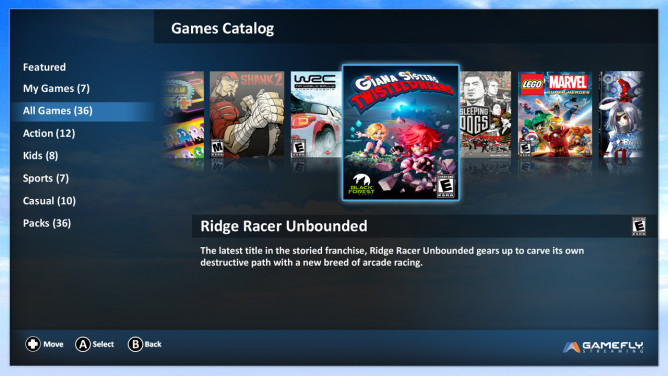 To get started, you're going to need Amazon's $40 Fire game controller. Each title will work with the gamepad, and they run on both the Amazon Fire TV and Amazon Fire TV Stick. The service is launching as an exclusive for Fire TV devices. Other set-top boxes are not invited to play.

GameFly's service lets players purchase games in packs that start at $7 a month. Six bundles are available at launch, including one based on LEGO. The library of 40 titles includes Darksiders II and the Arkham series. You're not getting the most current crop of games here, but they're better than most of what you can find in the Play Store.

Amazon Adds over 600 Channels, Apps and Games to Fire TV Devices in 3 Months

Amazon Fire TV and Fire TV Stick plug into your HDTV for easy and instant access to blockbuster movies and popular TV shows via Amazon Instant Video and Prime Instant Video, live TV, sports, music, and more from popular channels like Netflix, Hulu Plus, Sling TV, HBO Go, SHOWTIME ANYTIME, and WatchESPN. In addition, with Amazon Fire TV you can play new and popular games such as Minecraft, Crossy Road, and many other best-selling and highly rated titles. Games can be played using the Amazon Fire TV remote that comes with the device, or the Amazon Fire Game Controller. Fire TV is a tiny box with voice search built right into the remote, and a quad core processor for seamless streaming; Fire TV Stick is a small streaming media stick that brings an incredible amount of power and content at a great value—it’s just $39. Learn more about Amazon Fire TV and Fire TV Stick at www.amazon.com/FireTV and www.amazon.com/firetvstick.

[Update: It's Official] Microsoft Buys 6Wunderkinder, The Makers Of Wunderlist