There was a time when we thought bacon could make almost anything better. We were wrong... It can make everything better! Things started simple with bacon appearing on breakfast plates, hamburgers, and sandwiches. Society eventually aimed higher with more creative endeavors like bacon ice cream, bacon-wrapped pizza, and of course, bacon-wrapped bacon. We couldn't even stop there because cocktail culture simply wasn't complete without bacon-flavored vodka. Why am I talking so much about bacon? Because this tasty meat has been sprinkled on top the API Overview page in the M-Preview SDK developer documentation. Take a look: 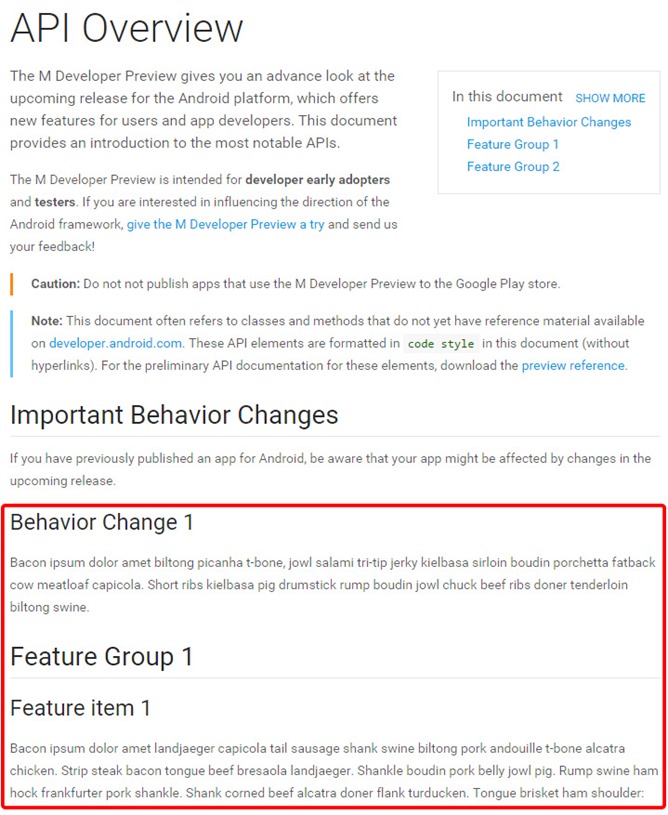 What you're seeing above is "bacon ipsum," a delicious alternative to the lorem ipsum commonly used in graphic design and publishing as filler until a final copy is written. It seems that a few of the salty placeholders were accidentally preserved in the API Overview page when it was released to the public a few days ago. According to a response in the developer preview bug tracker, the mistake has been fixed and an updated version of the preview page should be released shortly. If you're quick and you would like a copy for yourself, the docs can be downloaded from this link.

Now that Google has set a precedent, you might feel like your documentation could use some fattening up, as well. To produce your own succulent filler text, venture over to baconipsum.com and generate your own non-kosher passages. Anthony Bourdain would be proud.

Based on my research, I must offer one cautionary warning: do not run an image search for "bacon-wrapped bacon" unless you want to be both horrified and curiously hungry.

Google Beautifies And Consolidates Account History Into One Interface