Android's share menu has always been useful and extensible, but Android M will make it even more handy with the addition of direct share. This is a set of APIs that will let developers specify sharing targets deeper inside their apps. So instead of sharing that photo to Hangouts, for example, you might be able to share it to a specific contact in Hangouts in a single tap. 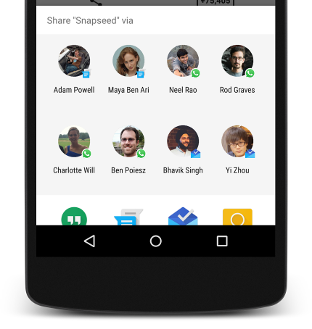 Direct Share will appear in the system-level sharing menu, and might be for specific contacts or communities within an app. The examples provided in the SDK docs appear to mostly be chat and messaging-related—Hangouts, Inbox, and Whatsapp (remember, just a mockup) all with conversations listed at the top of the share menu. If you were to tap on one of these icons, your content would be shared directly to the conversation within that app.

It's up to developers to enable direct share in their apps and choose what targets are exposed in the dialog. Most apps will probably only include a few recent deep links in addition to the overall app. Presumably there's some way for Android to prevent apps from cluttering your sharing menu with too many targets, maybe with some sort of contextual filtering of the list. You can hear a bit more about direct share in the video above at the 24m 30s mark.