The OnePlus One is still a great deal in terms of hardware, even more than a year after its release. If you'd like an even better deal, keep an eye on the OnePlus online store this week. According to this page, the One will be $50 off during "flash" sales, at least once per day between today, June 1st and Sunday, June 7th. Times for the start of the sale will vary, and presumably a set number of discounted phones will be sold each day. 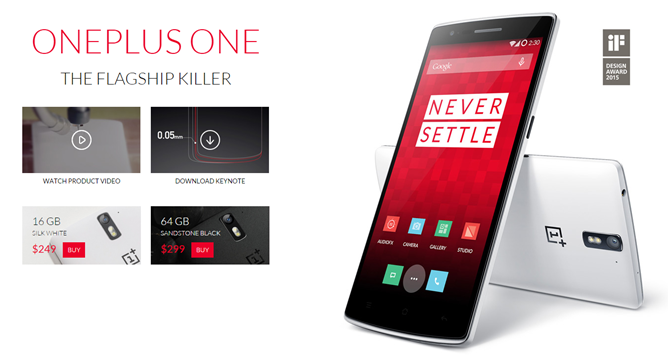 The discount is applied to both the 16GB white and 64GB black versions of the One, bringing the prices down to $249 and $299, respectively. That's still a pretty amazing price for a phone with a 5.5" 1080p screen, a Snapdragon 801 processor, 3GB of RAM, and a 13MP rear camera, to say nothing of its unique software offering. Right now users can choose between the original Cyanogen software or the Oxygen ROM developed internally at OnePlus, both of which have been upgraded to Android 5.0.

While new entries in the market have tried to grab the attention of spec-hungry bargain hunters, notably the ASUS Zenfone 2, there's no denying that the OPO is a great deal at $249. The OnePlus "Two," or whatever the phone's sequel turns out to be called, is a bit overdue, but there's nothing forcing OnePlus to bow to the conventional once-a-year release schedule.

[Update: Nintendo Says No] Nintendo's Next Console May Be Built On Android