A manufacturer really has to go out of its way to make a portable speaker that isn't Bluetooth all that compelling. It's bad enough most of us still have to plug in our phones to charge—you still want me to plug something into the headphone jack and leave my phone lying there just to listen to music?

But the GOgroove Pal Bot is adorable enough to compromise for. It's shaped like an Android, and at the very least, it's good enough to sit at the corner of your desk and use as a paperweight. We've seen its price drop before, but now it's available for a measly $10 on Newegg. 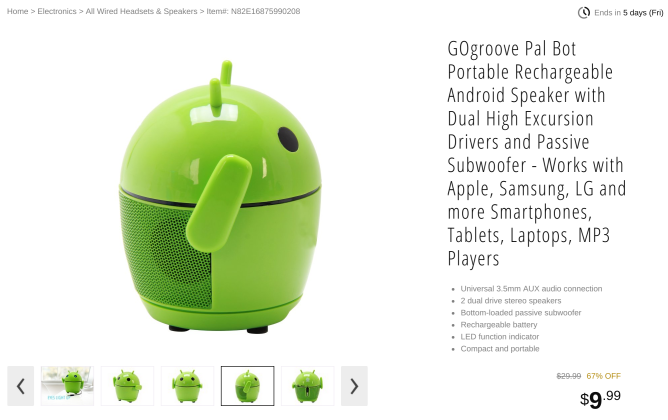 Newegg says this is a 67% discount off a standard price of $30. Amazon will sell you the same product right this moment for $17, which it says is a 72% discount off $70. Either way, you're spending $10 to get this thing right away, which is nearly half as expensive as $17. It's simple math, really.

This flash sale ends in five days, so you have until Friday to place an order. Shipping is free.

Google+ Link And 'Share' Shortcut Disappear From The Google Bar