Buried in the newly-located Google settings is a curious area called "Smart Lock Passwords." While it doesn't make its function very clear, once you try to sign in with one of the supported apps, it gets much more obvious. Take, for instance, Netflix, one of this feature's launch partners. After signing in as you would normally, Smart Lock will ask if you'd like to store your password for future use. 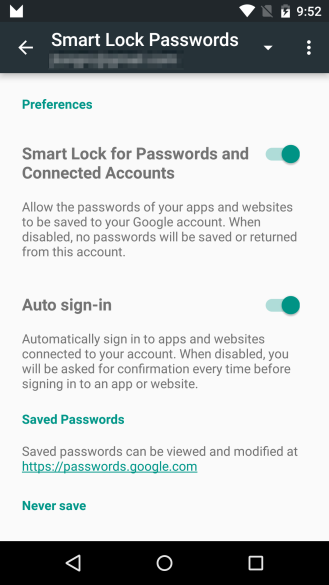 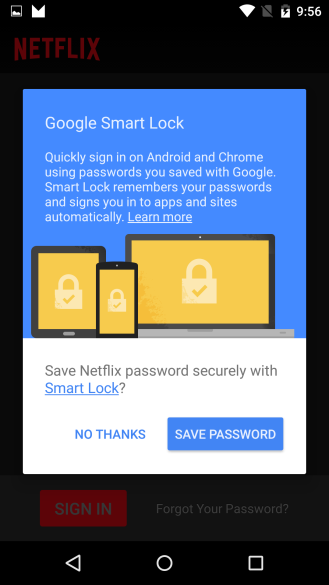 Now, at this point, you haven't really seen the fun part. Storing passwords is one thing, but making them useful is another. To demonstrate, I uninstalled the Netflix app and then opened it for the first time. I saw this screen for no more than 5 seconds: 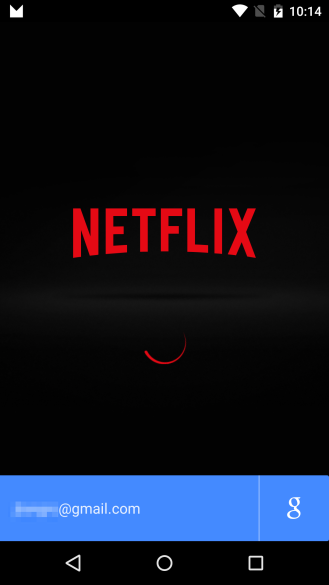 That blue bar means Smart Lock is signing me in automatically. Even though my Netflix account has no formal tie to my Google one, the fact that Smart Lock stored it and the app has included support for the API means I get this seamless integration. You can recreate this experience on Orbitz, Instacart, The New York Times, and Eventbrite. Beyond apps, this feature plays well with Chrome's existing password manager and will help with Chrome sign-ins as well.

This will also work on Android TV, meaning you won't have to sign into apps that support Smart Lock as long as your Nexus Player or supported set is associated with the right Google account.

Smart Lock Passwords is not an Android M Feature Spotlight because we are told it will be shipped with coming versions of Google Play Services. At the least, Lollipop devices will enjoy it in the relatively near future.

Developers can get more details at Google's Identity Platform page, of which Smart Lock is a part. The newly-named Identity Platform refers to Google's set of tools for developers to build safe and easy authentication into apps and services. This initiative also pushes for using Google accounts as a sign-in method instead of just for storing a separate set of credentials. Google hopes to give developers who aren't as familiar with creating secure user log-in systems a hand in doing so.

Android M directs users to passwords.google.com for more info and to manage settings, but that link is dead as of this posting.