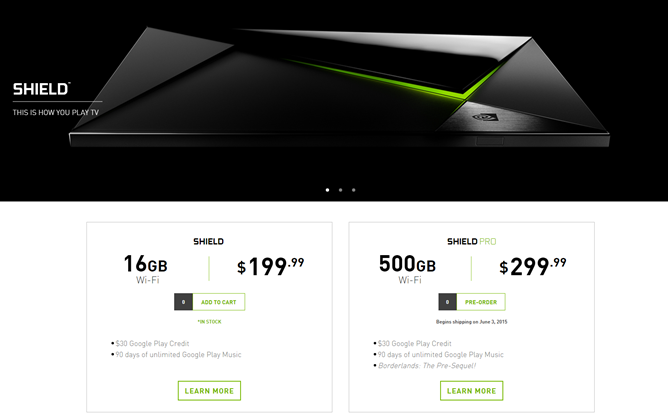 SHIELD comes with $30 of free Google Play Store credit and 90 days of Google Play Music All Access. If you buy the more expensive model, you'll get the Android version of Borderlands: The Pre-Sequel for free when it launches in July.

The various SHIELD accessories are also available. Extra controllers are $59.99 (though the SHIELD also works with generic Bluetooth controllers, USB mice and keyboards, or even USB versions of the Xbox 360 controller). The swanky SHIELD Remote, which includes a microphone for voice commands and a headphone jack for private listening, is $49.99. The SHIELD's vertical stand, which reminds me a lot of the PS2 stand from way back in 2000, is $29.99. Amazon is delayed by about three weeks on the stand. For some reason Best Buy seems to be lagging behind - their listing shows the SHIELD as "coming soon," and doesn't even have a photo of the unit. NVIDIA's store charges shipping, but Amazon should offer free economy shipping or free two-day shipping if you're a Prime member.

Inbox 1.8 Is Now Open To Everyone, Adds Swipe To Delete, Signatures, Trip Bundles, And More ...