Just as expected, Google has taken the wraps off the latest iteration of Android at Google I/O. So far all we have with regard to the name is the placeholder "Android M." Will that be Marshmallow? Marzipan? M&M? Magneto? We don't know, but we do know what sort of features it will bring. There are six tentpoles in Android M. 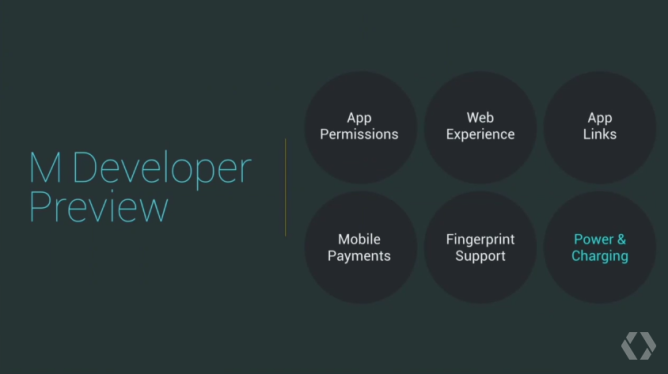 Google also said there are a lot of little things in M that will improve the experience. For example, word selection will be better with word chunking. The sharing menu has direct access to your contacts too. Oh, and the volume controls are a little more powerful when compared to Lollipop.

As with Android L, there's going to be a developer preview. We'll have all the details on that soon. Watch for the image downloads to go live soon.

Google also announced Google Now on Tap. It didn't include this in the main M feature list, which is strange. Google Now on Tap lets you get contextual information and answers based on the context of what's going on in an app. It looks really cool.

And a lot more

Google left quite a lot out of the announcement. Check out our feature spotlight series for all the details.

[I/O 2015] Android Pay Is Now Official, Will Be Available For KitKat And Newer Devices