Well, there is nothing that the internet does a better job of than spreading rumors, and the image on the face of Google's own David Burke's watch started a big one. There, on his shiny new Huawei Watch (Huatch), was the picture of a milkshake for all to see, a dessert that just happens to start with the letter M. The picture below pretty much sums up what happened next. 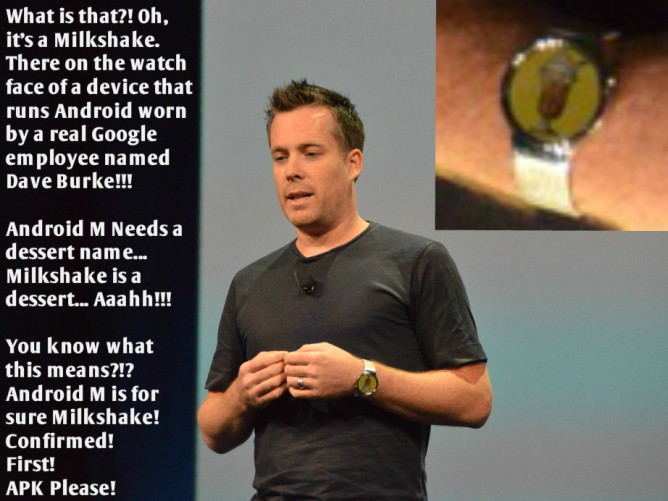 However, before anyone could bust out the maraschino cherries and whipped cream to celebrate unlocking the secret name of the new Android OS, Dave took to twitter to calm things down.

Rumors of Milkshake are exaggerated. My watch face hack cycles thru' my fav M desserts :). Doodles by @dsandler! pic.twitter.com/0GwoQ78thD

Bummer, and it seemed like such a good theory. So it turns out Dave just likes to cycle through different images of desserts that start with the letter M on his watch. Desserts like milkshake, milk (is that a dessert?), a meteorite (don't even start to tell me that looks like a macadamia nut cookie), and malt whiskey (what?).

After reading that tweet, I'm still not 100% convinced that Dave is telling the truth about Android M's name. However, I'm also not 100% convinced that Dave knows what a dessert is. Two of his four watch faces are beverages and one is of a freakin' rock from outer space (I told you already, it looks nothing like a cookie)! What kind of parents did this guy grow up with? 'Oh Davy, my sweet little boy, good job eating all your green beans. I made your favorite milk and whisky dessert to wash your dinner down with. You're going to sleep so well tonight!'

Anyways, how about you guys, are you convinced? Is Milkshake the official name of Android M, or is it something else? Let us know in the comments below, and please also tell us what you think the new name should be. My vote is on Milky Way because – Hey, wait just a minute, something just occured to me. There are meteorites in the Milky Way and Milky Way is a candy that starts with the letter M... Oh man, I've got to go guys, I have some internet rumors to spread.

[Android M Feature Spotlight] App Info Is Accessible From Notifications Again, But It Takes An ...

Google Now Launcher Will Soon Allow You To Uninstall Apps From Home Screens Instead Of Just The ...