Last year when material design was introduced to the world, Google emphasized that its specs were a living document. Indeed we've seen several updates to the spec itself since it launched, but Google's also paying attention to its overall design presence, as evidenced by today's major update to google.com/design.

The site has been made over with a new grid filled to the brim with awesome content. 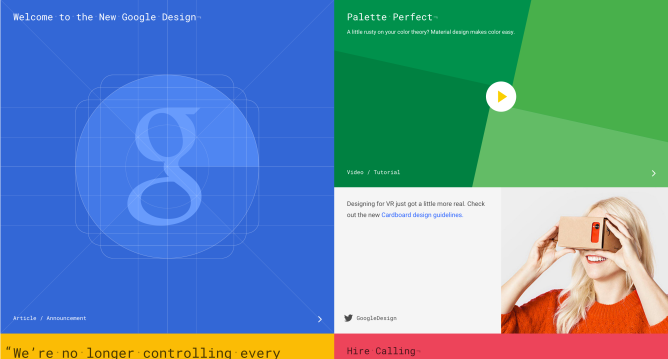 Google has added design guidance for TV and Auto, and even added an entire article about branding in material design, something I've written about before here at AP. There are also guides for designing between platforms and a downloadable icon font.

The best way to get a handle on all the new content (and the site's new design) is to check it out first hand, so hit the source link below.

Inbox 1.8 Is Now Open To Everyone, Adds Swipe To Delete, Signatures, Trip Bundles, And More ...