Ever since Android 5.1 began rolling out to the Nexus 6 a few months ago, there have been numerous builds at the same time, depending on country and carrier. This can be a lot for even the most hardcore of Nexus fans. Fret no more, however. We are here to help.

This post is intended for people who have locked bootloaders and flash OTAs - you know, the people who keep their phones stock. While I realize that a lot of Android Police's readership are power users, a very large number of us, myself included, have neither the time nor sufficient amounts of interest to unlock bootloaders, root devices, etc. Plus, unlocking your bootloader comes with security risks, which could be a deal breaker for a lot of people, especially if their phone is used for business or contains sensitive information.

All was well in Nexus 6 Land until Android 5.1. At the beginning of the rollout, every Nexus 6 everywhere in the world was using the same build of Android 5.0.1, LRX22C. It was right around this time that the two holdout US carriers, Verizon and U.S. Cellular, came on board. At that point, things started getting interesting. New builds of Android 5.1 were released for certain carriers and certain regions, which had the effect of confusing a lot of people, especially those who got impatient and flashed a build manually that turned out to be "wrong." Let's examine this on a carrier-by-carrier and region-by-region basis, so you can make sure you're on the right build and, thus, the correct update path.

This is widely considered to be the "standard" update track. As far as anyone is aware, there are no carrier-specific builds to be found anywhere outside of the US, Australia, New Zealand, and India. For anyone outside of these countries, your update track is LRX22C -> LMY47D -> LMY47Z.

Australian carriers are notorious for pulling the same shenanigans with software updates that US carriers do, and that appears to have reared its ugly head beginning with Android 5.1. Instead of getting LMY47D like everywhere else in the world, devices with SIM cards from Australia, New Zealand, and India received LMY47I. As an aside, I'm aware that India isn't included in even the most liberal definitions of Oceania, but it's close enough for the purposes of Nexus 6 updates. For right now, there is no Android 5.1.1 OTA for devices running LMY47I yet, so we have no way of knowing if Oceania will get back on the main build (LMY47Z) or get something different entirely.

The Uncarrier was the first to get the "got to be different" train rolling down the track. Instead of going down the same upgrade path as the international models, it instead had its own unique Android 5.1 build, and that has continued into Android 5.1.1 as well. T-Mobile's official upgrade path is LRX22C -> LMY47M -> LYZ28E. In the case of T-Mobile, it's understandable that it would have its own Android 5.1.1 build since it includes Wi-Fi calling. That feature is very carrier-specific and Google could have felt it needed to be tested further before baking it into the "main" Nexus 6 builds. As a software developer myself, I can tell you that major features like that should always be rolled out to as small a group as possible in the beginning as a method of damage control in case something goes majorly wrong. I wouldn't be shocked to see T-Mobile get back onto the main build with the next OTA, but that's purely speculation.

Big Red was the last of the big five US carriers to get on board with the Nexus 6. As a matter of fact, the carrier was so late to the party that its device launched with Android 5.1, LMY47E, which was unique to Verizon. In addition, Google also released an OTA for non-VZW Nexus 6s with Verizon SIMs that would update them from LRX22C to LMY47E. So far, there is no Android 5.1.1 OTA yet for devices on this build, and there most-likely won't be until Verizon gives the OK. There's also no way for us to know if Big Red will continue having a unique build or if it will get back on the main update path by moving to LMY47Z.

America's largest GSM carrier has been on the Nexus 6 train since the beginning, just like T-Mobile and Sprint. Amazingly, AT&T has not strayed from the international update path so far. Devices on AT&T have gone from LRX22C to LMY47D, although that OTA was delayed for over a month for AT&T customers. Since an OTA from LMY47D to LMY47Z is available, you can flash that update manually, however it could take you off the carrier's official update path if AT&T gets its own Android 5.1.1 build for some reason. We won't know what its build will be until there's an official announcement, so it may be best to just sit on the fence a while longer.

US Devices Purchased From Google Play Or Motorola

If you bought your Nexus 6 SIM-free from Google or Motorola, then your update path will follow whatever SIM card you've got in your phone. Your choice of carrier dictates your update path, and it will mirror that of a device that was purchased from that carrier. Sadly, there is no magic way to avoid carrier approvals, even if your Nexus 6 wasn't bought from a carrier. That's the way the cookie crumbles this time around. 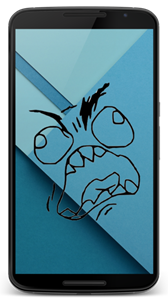 So, what happens if you're on T-Mobile and flashed LMY47D because you just couldn't wait for Android 5.1? Well, now you're stuck because the Android 5.1.1 update with Wi-Fi calling is only rolling out if you're on LMY47M, which is the official T-Mobile build. Well, the only way to get around a scenario like this is to flash factory images. If your bootloader is locked, though, that's going to mean unlocking it, and losing all your data in the process. Unfortunately, there's no magic option to get around that. If your bootloader is already unlocked, though, you can flash the factory images for the proper build, and not lose your data. Simply don't flash the userdata.img file.

In the end, if you sideload OTAs with a stock system and locked bootloader, you're going to run the risk of having the wrong build for your device. For some, it's immaterial if it's the wrong build or not, and that's fine. If you do care, though, it's probably best to just stay patient and wait for that OTA notification to show up on your phone, that way you always know you're on the right build for your carrier or region.