Want a car with Android Auto? Chevrolet probably just became your best bet: the American automotive giant just announced that 14 (fourteen, that's right) of its 2016 model year cars will get it. The really important part, though, is that 10 of those 14 will come with an Auto-compatible system even at base trim level. That's pretty outstanding.

Here are the cars, which is basically the bulk of Chevrolet's entire 2016 lineup:

Yes, if you count the convertibles as the same car as their coupe siblings, it's 12 models, but still - damn impressive. I also explicitly got confirmation that the cheapest car in the US lineup, Spark, will have an Auto-enabled head unit at every trim level. The 2015 Spark starts at just a bit over $13,000 (with destination), so I wouldn't expect the '16 to be a huge amount more. Let's think about that for a moment. For the price of not much more than an Apple Watch Edition and matching gold MacBook, you can get an entire car with Android Auto. Oh, and the car should last slightly longer than two years before becoming hopelessly outdated. 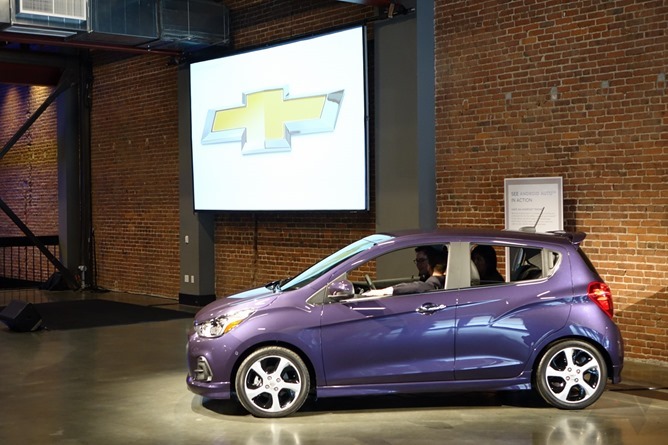 It was strongly implied to us that, even though exact trim info isn't available yet, the vehicles that don't have Auto at the very basic price tiers are only the ones that make sense. The lowest trims (and I mean the lowest of the low - fleet level) on the Silverado, Silverado HD, and Colorado will come without the Chevy MyLink display necessary for Android Auto. This makes sense, because they're trucks, and if you're buying a truck for a fleet or other actual work usage, you may just want it stripped of any all options to keep the price down. Chevy sees this as the exception, not the rule - most of the trucks that end up on dealer lots will have a compatible system. The one car (versus truck) of the group that probably won't have an Auto-ready head unit at its most basic configuration is the Malibu, which is also a popular fleet vehicle. Again, Chevy suggested that the number of Malibus you'll find at dealers without at least the 7" MyLink system will be very small - all but the truly stripped cars will have Android Auto as standard.

That also means every 2016 Spark, Cruze, Camaro, Impala, Volt, Corvette, Tahoe, and Suburban sold in markets around the world will come with or get Android Auto via a future update. Yes, I know that last part is a bit less than reassuring, so let me elaborate.

Chevrolet has two infotainment systems it's pushing for 2016 - MyLink 7" and MyLink 8". One is billed as a basic system, one is a premium system. You can guess which is which. Both are also from different suppliers, meaning different chipsets and parts, so Auto (and CarPlay) must be developed and tested on both systems. Right now, the MyLink 7" will support Android Auto right off the showroom floor - no updates (supposedly) necessary. The nicer 8" system isn't quite there yet. Chevy is committed to putting Auto on the 8" systems, though, and customers will get a software update to add support at a later date. And yes, that probably means a trip to the service department at the dealer.

The 7" system will only be available on Spark, Cruze, Malibu, Camaro (+vert), Silverado, and Silverado HD. It's worth noting Camaro currently has no release date, and the 2016 Cruze, Silverado, and Silverado HD aren't even announced yet. The 8" system shipping without Auto, though, will be available on 13 of the 14 announced models (Spark doesn't have the 8" as an option). Here's a table breaking that down. (Also of note: both systems will ship with Apple CarPlay compatibility.)

Regarding the "around the world" part, Chevrolet actually is doing something quite cool. Your country isn't on the supported list for Android Auto by the time Auto-ready cars come to market? Chevrolet doesn't mind - your car will still ship with Auto compatibility (assuming it's the 7" system), so when your country does get it (or you trick your phone into activating it somehow), your car will be ready to go. That's pretty cool.

As to the question all you current GM/Chevrolet owners want answered, I'm sorry: no 2015 model year or earlier Chevrolets will get Android Auto, and I sincerely doubt there will be an easy way to "hack" it. Chevrolet is setting a hard cutoff here, but that's probably what you can expect of almost every carmaker's strategy with Android Auto (Hyundai is definitely a bit of an oddball with the '15 Sonata upgrade). As to why current vehicles won't be upgraded? There are probably a multitude of business and technical reasons for the decision, but at least one of those is the display panel - Chevy wanted multi-touch capacitive displays across its entire fleet for Android Auto and CarPlay (so you can pinch to zoom and such), and even the '15 models didn't have them.

The first Chevrolet you'll be able to buy with Android Auto? Chevrolet doesn't really discuss production start timelines, so we don't know yet. While I may have heard Corvette will be the first to ship with the new 8-inch system (which will have CarPlay at time of sale), that means it will have to wait for a software upgrade down the line before it gets Android Auto. The 7" system that ships with Auto and CarPlay already good to go appears on a more limited selection of vehicles, but the earliest-announced of those are the Malibu and Spark, so I wouldn't be surprised if one of those is the first Chevy we see with Auto. But with the 2016 Cruze getting unveiled very soon, it's hard to say which will actually be first, and more importantly, first in volume.

We'll certainly be on the lookout for timing specifics as they happen, but for now, you've got the bulk of the details for Chevy's 2016 Android Auto plans. As to other marks under the large GM brand (Cadillac, Buick, GMC, and GM's non-US marks like Opel), I'd expect similar announcements from them later this year. While not unified across every brand, GM's tech portfolio is definitely getting more slim and trim, so the sister brands shouldn't have a hard time implementing this on at least some of their vehicles.

LOS ANGELES – According to Strategy Analytics, there are more than 2.3 billion

smartphones in use globally, and that number continues to rise. And on the road,

customers are demanding better integration between phones and their vehicles.

Whether they have an Apple or Android phone, Chevrolet is committed to providing

the smartest, simplest connected driving experience possible to owners across the

For the 2016 model year, Chevrolet will offer Android Auto and Apple CarPlay

compatibility in more models than any automotive brand. The 14 Chevrolet models

include the all-new 2016 Cruze, which will debut on June 24. Cruze is Chevrolet’s

models are listed in a chart below.

“For most of us, our smartphones are essential,” said Mary Barra, CEO of General

Motors. “Partnering with Apple and Google to offer CarPlay and Android Auto

access both Android Auto and Apple CarPlay. The eight-inch version of MyLink will

be compatible only with Apple CarPlay at the beginning of the 2016 model year.

While development and testing is not yet complete, Android Auto compatibility may

be available on the eight-inch version of MyLink later in the 2016 model year.

Each system builds off of the features smartphone users rely on most. Android Auto

is built around Google Maps, Google Now and the ability to talk to Google, as well

as a growing audio and messaging app ecosystem that includes WhatsApp, Skype,

them on the vehicle’s display in a smart, simple manner. That allows drivers to

make calls, send and receive messages and listen to music right from the

touchscreen or by voice via Siri. Apple CarPlay supported apps include Phone,

Messages, Maps, Music and compatible third-party apps. A full list of those apps can

connectivity across a range of cars, trucks and crossovers in the U.S. and Canada.

In less than one year, Chevrolet has connected more than a half-million customers

Chevrolet customers in markets around the world including Brazil, Mexico and

Canada will benefit from this new level of smartphone integration. Specific market

availability for Android Auto can be found here. Current Apple CarPlay markets can

In 2014, the 14 models included in this rollout accounted for more than 2.4 million

Using either application is simple in a compatible 2016 Chevrolet. A “Projection”

icon on the MyLink screen is visible when a phone is not connected, then changes

compatible phone is connected via USB. Android Auto requires a phone running the

Android Lollipop 5.0 operating system or above, while Apple CarPlay requires an

Compatible apps need to be downloaded to a phone before using. Apple and