Google keeps patiently improving the ecosystem surrounding the Chromecast and its various software tie-ins. But the latest trick is casting not to a gadget or screen, but to a conversation. At least some users are now able to cast tabs to a video Hangouts session, allowing the recipient to watch the video (or whatever else you've got in that tab) without a cumbersome link. It doesn't seem to be live for everyone, but check out your Chromecast extension if you'd like to try it out. 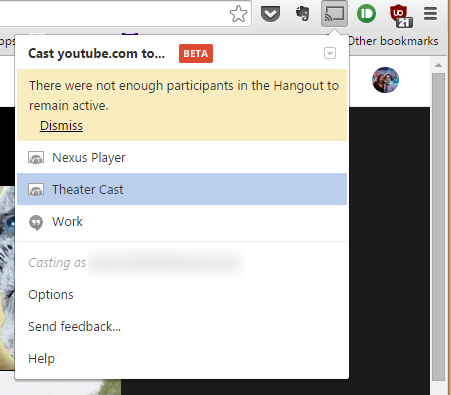 The system seems to prefer an active conversation. It won't let you cast to a Hangouts conversation that only includes you, for example, and it won't go for a Hangout which someone has opened but not yet joined. If you're in an active Hangout and cast the tab to it with the extension, the tab will appear in the Hangout and take focus, almost like a third party, and remain until the initiating user stops casting.

The immediate application is obvious: you can watch short videos in the interface and see exactly what everyone in the Hangout is seeing at the same time. But this could also be a big boon for more esoteric purposes. Imagine a couple in a long-distance relationship who want to watch new episodes of Orphan Black together. Load up a Plex or Google Play Video tab, hop into a Hangout, cast it, and you can share the experience across a thousand miles or more. Neat.