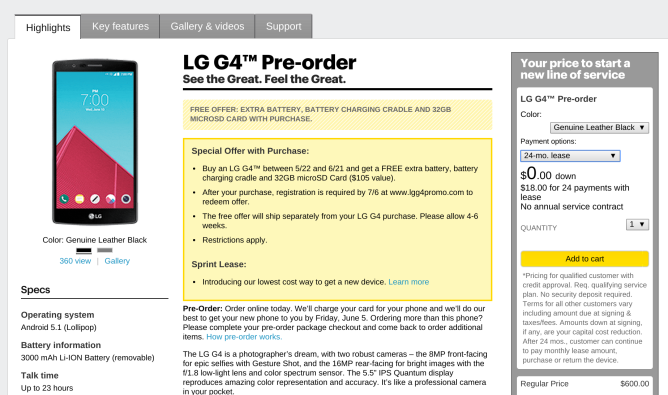 The G4 will go for $600 outright, $200 with a two-year contract, $25 a month for twenty-four months with Sprint Easy Pay, or $18 a month with Sprint Lease. While it's not explicitly written anywhere, they might also give you one if you head to the nearest carrier store and start throwing twenties at the window.

David Ruddock, as some of you may know, is somewhat or a critical reviewer. But he went so far as to call the G4 perhaps the most practically appealing of 2015's flagship phones. You get a Snapdragon 808 processor, 3GB of RAM, a curved 5.5-inch display, and a 16MP rear camera. The sizable 3000mAh battery is removable, and there's a microSD card slot. LG's included software remains quirky as always, but some people find it somewhat charming.

You have two weeks left to decide if you want one on day one. Or, you know, you could pick it up at any point after that. No one's rushing you. Well, the free stuff kind of is. There's that.

Sprint offers more purchasing choices for today’s most popular smartphones and tablets than any other U.S. carrier including:

Customers have the option to add a $10 early upgrade charge to Sprint Lease or installment billing payments. With this option, customers can turn in their device and enter into a new Sprint Lease or Sprint Easy Pay agreement after just 12 consecutive payments.2

Pre-order begins online today www.sprint.com/LGG4. For a limited time, customers purchasing LG G4 can receive a second 3,000mAh battery, a 32GB memory card and a convenient battery charging cradle by mail from LG for a savings of more than $100.3

Stuck in a contract with another carrier? Sprint will pay whatever it costs to switch, including early termination fees and remaining payments on the phone installment plans – no matter what is owed. Customers simply need to switch to Sprint and turn in their current phone. Sprint will refund the switching costs within approximately 15 days of successfully completing the online registration and providing a bill that shows the early termination charge or device balance due.

Customers can easily create and print professional-looking photography with the new LG G4. Two robust cameras takes selfies to a new level and make it easier than ever to capture life’s most exciting moments. LG G4 offers a 16 megapixel rear-facing camera with F1.8 aperture and an 8 megapixel front-facing selfie camera along with the following shutterbug-favorite features:

Following a multiyear overhaul, the Sprint network now provides significantly better call quality and faster data speeds in more places than before. Sprint has received a total of 104 first-place (outright or shared) RootScore® Awards for overall, reliability, speed, data, call, or text network performance in the 77 markets measured to date in the first half of 2015.4

Combine Cute Little Critters And Their Powers In Cartoon Network's Mixels Rush For $2.99