It has been nearly a year since Google announced Android Auto, and it's still available almost nowhere. No car companies have built the technology into their 2015 vehicles (though some may get a software update with support later), and only a handful of aftermarket head units have the software. So what's the deal? Is it worth getting excited for? I've finally gotten my hands on one of Pioneer's Android Auto units (the 8100NEX), and here's how I'm feeling about it after a few days.

I was worried that connecting devices would be a pain because Android Auto is basically running on top of Pioneer's software, and the phones all have different OEM junk happening. However, it's completely painless so far. The unit is set up to automatically launch Android Auto when a compatible device is attached. I've tested a Galaxy S6, Note 4, and One M9, and all of them launch and run Android Auto just fine.

The messaging features in Auto are not exposed in any way until you actually receive a message from a supported app, but it's very straightforward once you do. Android Auto doesn't show any message text on the screen, thus preventing you from staring at it and reading when you're supposed to be driving. Instead, it displays a heads-up notification of new messages. You can tap on it and Auto reads the message. If you ignore the popup, the message will remain on the overview screen so you can go back to it later.

If you want to respond to a message, all you need to do is say "respond" in the voice prompt and recite your message. Android Auto will read back what it has, and you can either confirm or cancel the reply. Supported apps are slim at the moment, but it's got SMS, Hangouts, WhatsApp, Telegram, and a few others.

If you've got a Wear device, it acts like a handy little remote for Android Auto. Technically everything on the head unit's screen is happening on your phone, so that's not a huge surprise. 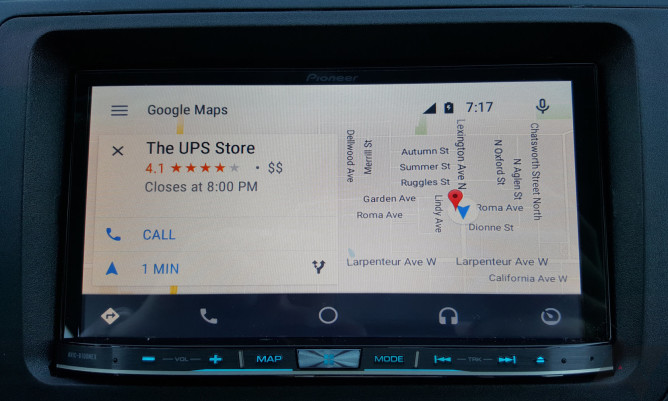 Navigation is more or less what you get on Android phones and tablets, which is a good thing. I think lane guidance might be missing right now, though. You can leave the navigation screen up if you need the map, or you can hop into other areas of Auto and still get voice prompts.

Speaking of different areas, there are five of them as denoted by the buttons at the bottom. You've got navigation, phone, overview/home, audio, and manufacturer features. There are no menus to dig through and no distracting notification content. This seems like an overall good layout.

I haven't had time to dig into every single function of Android Auto, and I'm sure I'll find more annoyances when I have. Right now, my primary concern is that Auto doesn't have "Ok Google" detection. It's strange... Google pushes the hotword detection pretty hard, but they can't figure out a way to do this on Android Auto?

It's possible this is supposed to work with some phones or with different hardware. Still, I have to press the voice button in the corner of the screen every time I want to issue a command. "Ok Google" is turned on in the connected phones, but maybe there's something wonky with Play Services? It just seems like this should work.

It's nice that Pocket Casts works with Android Auto, but the Play Music implementation is too limited. It gets the job done, but you can't access your full library. You have access to the Listen Now list, playlists, radio, and your saved queue. I understand this is probably done in the name of safety, but you can pull up an honest to goodness keyboard in Maps to search for locations. I don't see how exposing your music library is more distracting than that. Your best bet is to make playlists, which are easily accessible in the navigation menu. You can also use voice commands to start songs and radio mixes. 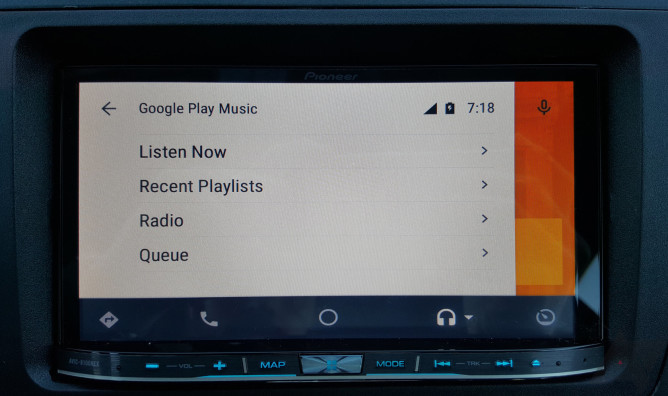 The Dialer baffles me in a similar way. You can only call your favorite contacts with the touch screen, which is a safety first thing. However, there's also a full number pad for dialing people. That strikes me as much more distracting than simply including your full contact list.

There are also a number of bugs and slowdowns, which I won't dive into here. App selection is poor too. Suffice it to say, Auto is still rough around the edges.

I'll have more things to say about Android Auto soon when we post a full review. I'm somewhat optimistic right now, but that's not the only consideration when it comes to Android Auto. There's a substantial investment involved here. The cheapest head units right now are around $500, and you probably won't get Auto in the base trim models of upcoming cars. It might be hard to justify.

In the meantime, feel free to post any questions you might have in the comments and I'll try to answer them.