The midrange smartphone market is getting more interesting by the day, both on its cheaper lower end or in the more expensive price bracket. The latter is the case of the newly unveiled Oppo R7 and R7 Plus, which tread that thin line between upper midrange and almost-flagship status, offering a list of impressive specifications in a very decent-looking package.

Oppo takes about 8 sections in its product pages to explain why the R7 and R7 Plus are such exquisite devices, comparing their curves... whatcha talkin' 'bout Oppo? These are the flattest flattened phones that lie flatly flatting on any flat surface. Oh boy, they mean that tiny little curve between the edges and the back/front, don't they? I guess it's technically a curve, even if it's the miniature version of one. 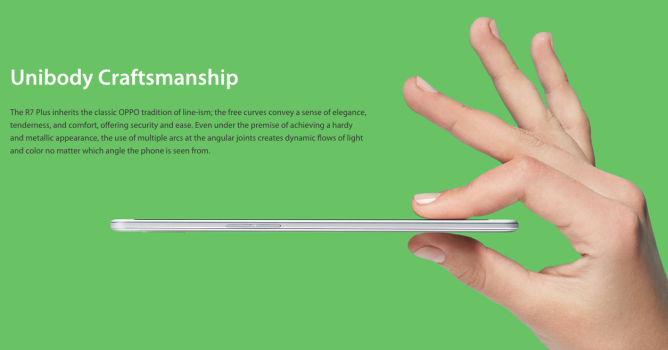 So where was I? ... comparing their curves to a violin. Or something. Excuse me for a minute. From pebbles, to ceramics, nature, and water ripples, I've lost count of the different things that have inspired phone designers over the last years. So this R7 is supposed to be as easy to hold as a violin and for Oppo's sake I'm going to pretend that I believe them. 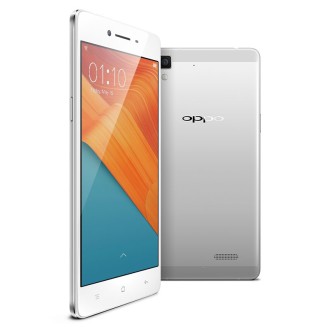 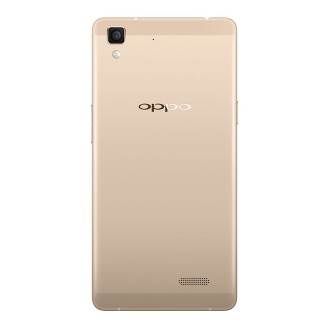 This is the R7

But don't get the wrong idea from my sarcasm here. The R7 (and R7 Plus), which had leaked a few times already and even appeared on JD.com, does indeed look fetching. Putting aside the marketing jargon that fills those product pages, there's a lot to admire, from the polished magnesium aluminum alloy that forms over 90% of the phone's body to the rounded edges, cough, I mean curves, cough, that make the display blend so well with the rest of the device. Most intriguingly, the metallic back has apparently been blasted to create a "velvet-like softness" that should be interesting to feel in person.

On the specification front, the R7 is no slouch either. In its 143×71×6.3 mm and 147g body, it packs a 5" Full HD display, a Snapdragon 615 chip, 3GB of RAM, 16GB of internal storage, a 13MP camera sensor on the back with an f/2.2 aperture, and a front 8MP shooter. There's the usual panel of connectivity options, but the most notable is Oppo's use of the now popular dual-SIM tray that can host a MicroSIM along with either a NanoSIM or a MicroSD card. A 2320mAh battery powers everything, with fast charging, but it's Oppo's VOOC technology not Qualcomm's Quick Charge 2.0. VOOC sounds impressive on paper, with 75% battery replenishing in 30 minutes. 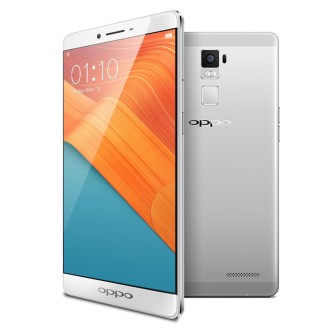 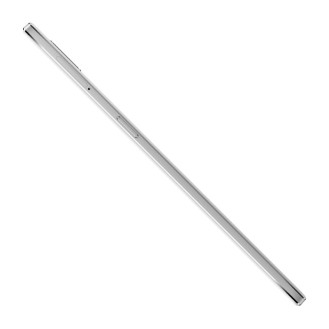 This is the R7 Plus

The R7 Plus is the R7's bigger brother, measuring 158×82×7.75 mm and weighing 203g. This huge phone has a 6" Full HD display, 32GB of internal storage, and a 4100mAh battery. The rest of the specs are the same as the R7, but you'll notice that the camera is placed in the middle compared to its side position on the R7 and that there's a small rectangle beneath it. It's exactly what you think it is: a fingerprint sensor for unlocking and encryption. 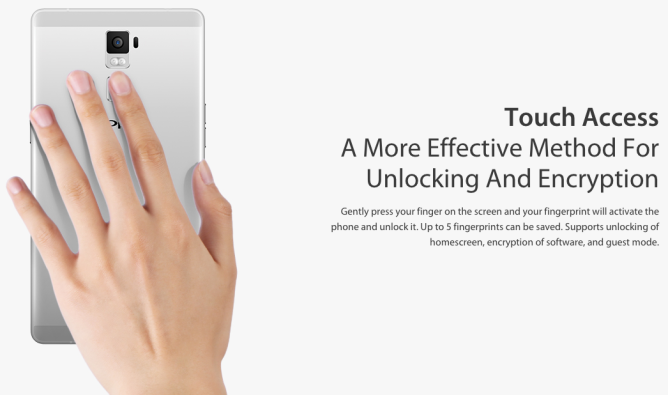 Both phones will ship with Color OS 2.1 based on Android Lollipop 5.1. That's Oppo's in-house ROM and it brings a few interesting tidbits to the table, especially in the camera app. Oppo has improved its multi-frames capture, allowing you to take larger and more detailed photos than what the 13MP sensor can deliver in one shot (they claim 52MP photos). There's GIF support as well as a beautifying feature for selfies, multiple focus options, Instagram-like filters, RAW support, and more.

There's no price or release date information, but we know that both phones will be available in silver and "gilded" (which is that golden bronze kind of shade). Here are more photos of the two devices. Try to guess which is which without looking at the file names. [Deal Alert] eBay Is Offering A Coupon For 10% Off A Bunch of Tech Goodies, Like The Samsung ... [Praise Duarte] AllCast 2.0 Gets Material, With More Material, And A Sprinkle Of Material On Top