It's close to a universal among those who are old enough that we all once owned a Nokia phone and played Snake. We didn't get those early cell phones to play games, but lo and behold, there was a simple and addicting game within. After many years, the man who brought Snake to mobile phones—Taneli Armanto—has teamed with Rumilus Design to revamp and re-release the classic with a little bit of modern flair. After their recent announcement, Armanto and Rumilus released the game to the Play Store yesterday. I've been testing it a bit longer than that and have enjoyed the way the creators stayed true to the original concept while still sprucing things up for a completely new era of mobile gaming.

So this is Snake. You wouldn't think the controls would be much of a topic worthy of discussion, but one thing has changed drastically compared to the original: our phones don't have physical buttons to steer anymore. By default, you move the snake by tapping. If you tap anywhere that is left of the snake, it will turn to the left. If it is already headed left, it will go either up or down, depending on whether your tap is above or below the snake. The main drawback with this method is the accidental double-tap. More than a handful of times I got antsy and pressed more than I meant to, causing the snake to go off in the wrong direction. Of course, that's operator error.

If you prefer not to tap, you can choose to swipe instead. Swipe up, snakes goes up, and so on. At first, I thought I liked this way better since it mostly avoids the overzealous tapping issue. There are two things to look out for with his control configuration, though. First of all, I found out my thumbs like to move diagonally, which will produce surprising results on occasion. The other thing is that as the game gets more difficult, your snake moves more quickly, and you have to navigate tighter spaces, it's hard to do multiple swipes fast enough to avoid crashes. I appreciate the second option nonetheless and my overall take is that there isn't a meaningful drawback in terms of the changed controls.

In terms of the core gameplay experience, they have expectedly spiced things up. The original Snake was pretty repetitive, even if it was addicting. Snake Rewind features a set of 10 levels, which gives you something to aim for as you go along. Unlocking a new level requires completing three "missions," which ask you both to do things that just involve playing the game well and, sometimes, achieving more ludicrous tasks. For example, one level requires you to move 300 spaces without collecting any fruit in a single game.

When you crash, you can "rewind" rather than starting a new game. Doing so just retraces your steps while also shortening the snake, which usually is enough to get you out of trouble. You will pay 5 fruits to do this, with the price doubling each time you do it within a single game. I usually gave up by the time the price got to 40 or 80, depending on how deep I was.

I think the difficulty of the missions felt about right. Each level has harder missions and they are tough enough that you won't be plowing through to "beat" the game in a single game or probably even a single week. There is a balance to strike, obviously, and I think Snake Rewind keeps it reasonable. 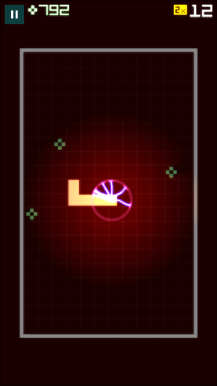 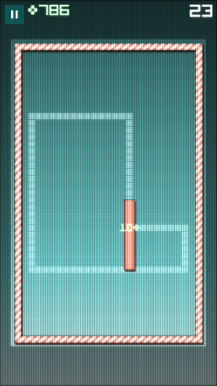 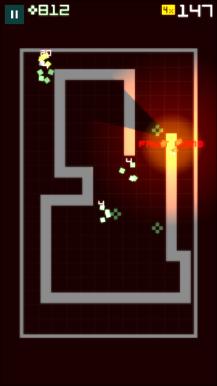 Another way of modernizing the game is changing the fruit. You have your standard fruit but also other items, powerups, and multipliers. There is a magnet, for instance, which will grab fruit that is within a square of you. The trailblazer fruit will cause a path to appear on the screen and if you can follow it, you are rewarded with bonus points. Yet another fun example is the fruit bomb, which will grant you all the ones currently on the screen. There are even others beyond that.

The key, though, is this is still Snake. There are lots of games out there. What we want from a Snake reboot is not an endless runner or a GPU-destroying, 3D adaptation, we want a game just like the old one that doesn't feel out of place on a 1440p screen and buttonless phone. Snake Rewind delivers.

You've seen a lot of the visuals already, so I bet you have some impressions formed. I wasn't sure what to expect, but I appreciated the design, particularly the distinctness of the levels. The gameplay doesn't really change as you progress, but each new level keeps things fresh. Snake Rewind feels at the same time both a distinctly retro game but also like the developers have the chops to make something truly modern. 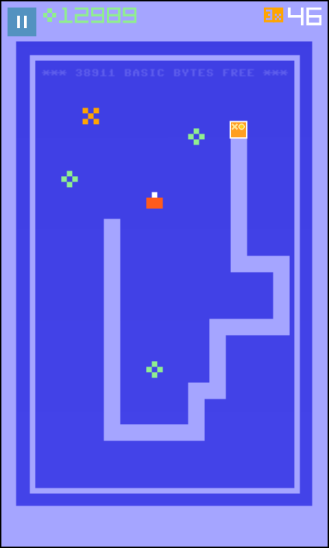 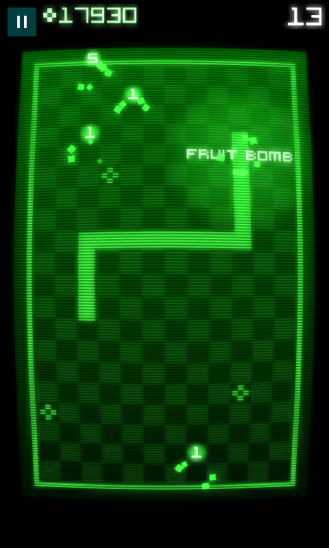 Things are kept simple, of course, but the menus and the interface are definitely sufficient. The sound also strikes this same balance, being self-consciously lo-fi. Also like the graphics, each level has its own track. On the "Advanced Boy" level, which has a very Gameboy feel to it, the music captures that aspect absolutely perfectly. The main criticism I have for the music is that some of the tracks don't loop perfectly, so you'll be jarred a little bit if you have been playing long enough for that to happen.

Could a free game truly fit in the year 2015 without some in-app purchases? Perhaps not. While Snake Rewind clearly did not sell out on the gaming experience, some will understandably worry that a freemium game will sell out in the more obvious way. I'm happy to report that no such thing has happened. There are things you can buy, but it is hardly the kind of shameless money-grabbing that has become so common. I actually spent several days playing it before realizing that you could buy things with real money. 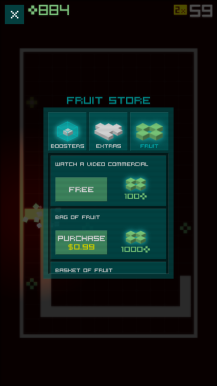 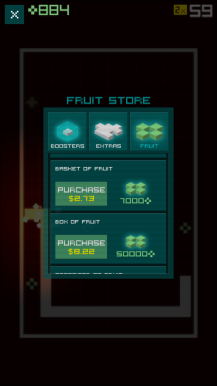 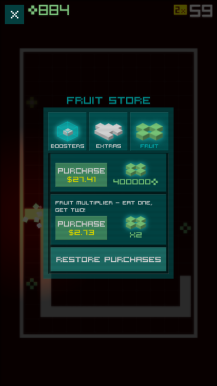 The game's currency is fruit. If you don't want to purchase it, just play the game. Of course, you don't need to buy anything with fruit, either. If you crash, you pay with fruit to rescue your game, but unless you are incredibly reckless there is almost zero chance of running out based on that. You can also buy power-up fruits and some other game-enhancing trinkets, but they are also very much not needed for a good experience. The main thing I expect people would want is to buy their way into new levels.

As you can see in the above screenshots, there are a few different price tiers to choose from. For reference, the 5th level costs 1600 fruit to buy your way into from the 4th. I can't believe you would ever spend the 50,000 fruit that you get for $8.22.

Of course you should. It's free, you don't have to pay your way through the game, and it will make you feel like you have the coolest Nokia ever made. It's a worthy successor to the iconic original. 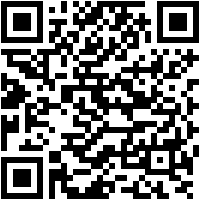 Knights of Pen & Paper 2 Makes A Saving Throw, Ventures Into The Play Store