Update Wednesday is starting off with a new version of the Gmail app. There don't appear to be any grand changes with this release, but it does boast at least a couple minor improvements. The only obvious change in this update comes in the form of a new full screen workflow for adding email accounts. A quick teardown also reveals that users will have the option to add vacation responders to their Exchange accounts, and Gmail's Unsubscribe feature is coming soon. 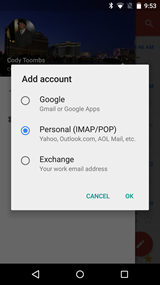 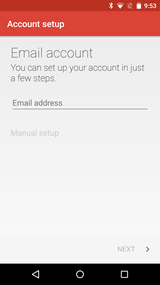 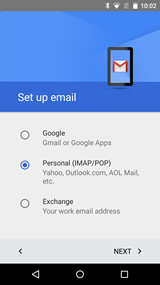 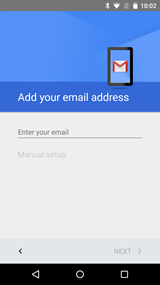 The Gmail team has been cleaning up some of the leftover interface elements that didn't quite fit in with the design guidelines we all know and love. The latest target for attention is the "Add account" workflow. In earlier versions, the first step was presented as a dialog box hovering over the navigation drawer. Picking Google would take users through the normal process of adding a device-wide account, but choosing to add a Personal or Exchange account led to a setup process that looked very out of place. The new version doesn't change anything functionally, but it does turn the dialog into a full screen activity, and now the two non-Google options look much more consistent.

The Gmail team just posted a short list of changes for this update:

The first item in the list is the most interesting. It adds a shortcut from the conversation view to contact cards. Just tap the avatar picture of a message sender and a card will pop up with contact information, recent conversations, and possibly many other details. This can be a great way to quickly launch a Hangouts session or check out the last couple of message exchanges. It's certainly faster than switching to Google+ or your phone's Contacts app. Thanks, Abhilash Bingi. 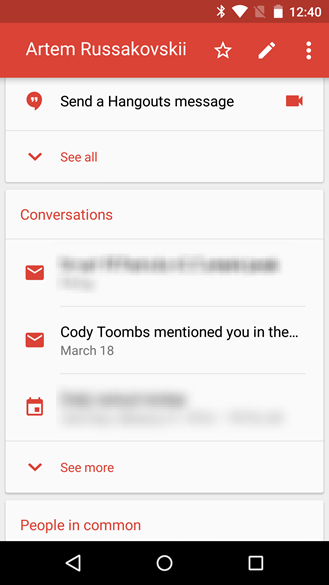 There aren't a lot of changes in this release, but a couple of small details do stand out.

One of Gmail's clever features to combat spam and other annoying email is an intelligent unsubscribe function. It begins by using conventional methods to remove an account from a subscription if a link is provided in the message body. If that procedure fails, Gmail will take increasingly aggressive steps to eliminate unwanted mail. The feature has never been directly available in the app, but that will probably change very soon.

The Unsubscribe option will appear in an overflow menu of the conversation view. It doesn't appear to be live, yet, but it may only show up for very specific types of email.

Strangely, this option seems to have come at the expense of the 'Report phishing' option. Since phishing attempts are frequently reported as spam, it might be that Google saw no reason to provide a second option to handle a very similar type of message.

For those who may not know, a vacation responder is a little feature in many email systems that will send an automated, pre-written reply to anybody that sends mail to you. Gmail has offered this function for years, even in the Android app. However, the app lacks support for setting up a responder on Exchange servers. Again, this should be changing soon. A new activity clearly identifies itself as a Vacation Responder on Exchange.

Business users will probably get quite a bit out of this since Exchange is very common in companies of almost any size.

That appears to be it for this release, but if anybody notices any other changes, let us know in the comments.

Chrome Dev Has A New Video Renderer That Should Play 4K Without Stuttering, And Here's How To ...