Google I/O 2015 is drawing ever closer, and that means it's time to start lining things up for the big event. As tradition dictates, Google is working on a fresh update to the Google I/O app. We've now got a beta release of the app, which just started rolling out to a small group of people who signed up last year. The changes aren't too elaborate, but they do some visual refinement and a few adjustments to the feature set. There are even a couple tidbits to learn from a quick teardown. 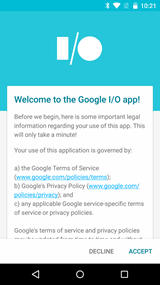 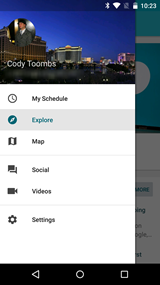 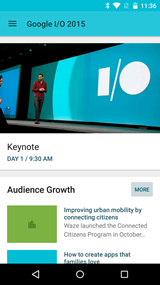 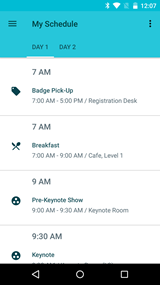 Last year's release of the Google I/O app took a number of steps toward what we would come to know as Material, but it stopped short of things like a navigation drawer that exists below a semi-transparent status bar and above the action bar. Many of those design issues were cleared up in subsequent updates to the open source code, but never made it to the Play Store. Now that this year's iteration is circulating in beta, we can see the transition to Material Design is complete, at least until the guidelines go through another round of changes.

In terms of functional changes, the People I've Met feature appears to be dead and buried. It used to be located in the navigation drawer, just above the Social option. As an attendee of I/O 2014, I have to say that I'm not surprised. Exactly one person scanned my badge, and I only recall seeing it done a handful of other times. I didn't get the impression it was an extensively used feature. 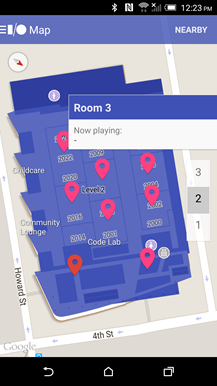 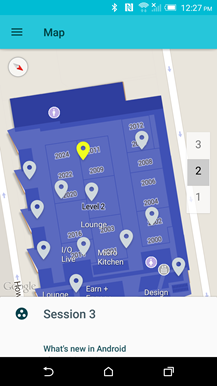 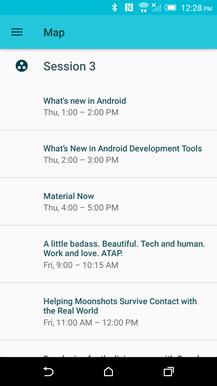 The Map section has also gone through a subtle but important change. Tapping on markers within Moscone no longer produces a pop-up box with the current session, but instead shows a list of every session scheduled for that particular location. This will come in handy for session planning this year since the scheduled times are shorter and it will be difficult to move around between rooms.

The remaining changes are limited to reorganization of elements. The Explore and Videos sections have been converted from a long stack of semi-sorted sessions to a list of groups organized by topics like Design, Android, and Wearables. Likewise, the Social section has been pared down to just the most well recognized hash tags and Google accounts on Twitter and Google+.

Believe it or not, there's a tiny bit of teardown material to be seen in this version. While I expect there's quite a bit buried in the code, the strings reveal a couple of interesting details.

San Francisco has some great mass transit, if you know what you're doing. It's not even that big of a city, so walking isn't usually out of the question. However, sometimes you just need to catch a ride. This year, Google is partnering with Lyft to give everybody a pleasant $50 discount off of their next 10 rides with the promo code GOOGLEIO.

<string name="explore_io_msgcards_conf_lyft_card">"We've partnered with Lyft to make sure your journey is as easy as possible. New users can download Lyft and apply the promo code GOOGLEIO to get $50 off their first 10 rides."</string>

Navigation inside of a building is usually a dead end for GPS. Wi-Fi can occasionally be used to get some bearings, but it's not too precise, either. This is where "beacon" technology is pretty handy. It uses a bunch of strategically placed BLE transmitters (beacons) to triangulate location. It's quick, efficient, and not that expensive. From the look of it, these beacons will be scattered throughout Moscone to help people get their bearings. Just a warning, if you've got a device running Android 4.3 or below, you should probably peek at this older bug watch for some tips.

<string name="welcome_around_text">"Show information about conference features near you such as what sessions are happening in a nearby room.

To do this the app will perform a Bluetooth LE scan to look for beacons and send this info to our servers for processing.

Once activated, this will run for the duration of the conference. Don’t worry; if you’d like to turn it off you can do that in the apps settings or by turning Bluetooth off.

The Beacon prompt has been removed in the latest update.

An update to v3.2.0 hit the Play Store a day after this post, and it turns out this string has been removed. Assuming the string doesn't return in a later version, it either means that this isn't actually going to be a feature of the I/O app, or it will simply happen without prompting the user. As usual, we'll just have to wait to find out.

That's about it for now, but I wouldn't be surprised if there's more to see in an upcoming release.

The source code for the I/O 2015 app hasn't been updated, yet. It probably won't be until after Google I/O is over, as is the trend we've seen in the past.