In recent years, Dropcam has been the leader when it comes to smart home security cameras. FLIR recently jumped in to the market with the FLIR FX wireless security camera. This is a mobile-centric security system that offers cool ways to review your video and receive alerts on your phone when something goes down at home. Let's see how it performs.

The basic FLIR FX camera comes with a stand for indoor use. There are also dash, outdoor, and sport mounts. The camera has its own battery good for a few hours of recording on its own, but the stand connects it to power and has an additional battery backup to keep the camera running a little longer in the event of a power outage. 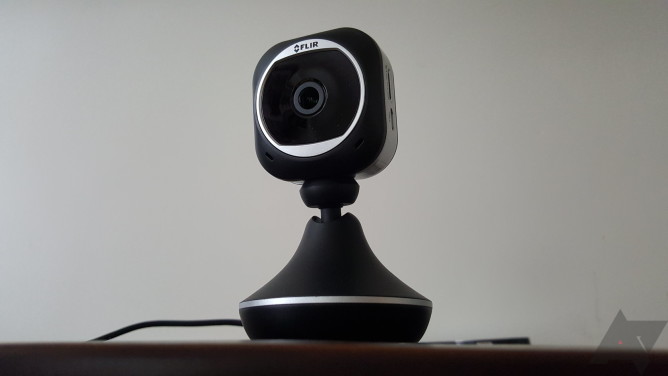 FLIR FX has a ring of IR LEDs around the lens that come on when it detects a drop in ambient light, making it great for night time use. The camera is able to record 1080p video (streaming tops out at 720p) and take 4MP stills, all of which can be accessed in the FLIR FX app for Android (or iOS). The outdoor enclosure (sold separately or as a bundle) adds two more IR lights for better outdoor visilibty. It's also IP67 rated for water resistance.

You can pop open the app at any time in order to see the live feed from your cameras, but ideally you'll set trigger events for motion, sound, temperature, or humidity. The camera has all these sensors built-in, and will push a notification to your devices when the limits you've set have been hit. Motion detection is probably the most common use for a security camera, and FLIR's SmartZone helps you narrow your focus. You can set up a SmartZone to trigger motion events only when something moves in a certain part of the frame. For example, a doorway. 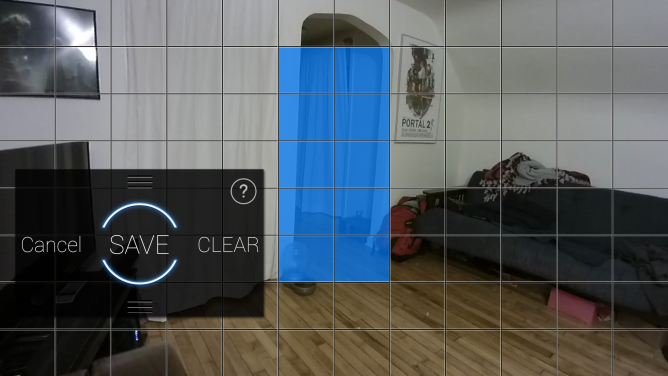 The app archives all your recorded clips for each camera so you can go back and see the relevant bits of video, but FLIR has an even faster way called RapidRecap. You can see an example of RapidRecap above (that's just one dog). It basically lets you choose a block of time and combine all the recordings from that window. The FLIR FX service intelligently overlays the video from those triggers and puts floating clocks on anything that's moving so you know when things happened.

Unlike Dropcam, FLIR FX has a completely offline local recording mode. You can set in the app to bypass the cloud service and save all video to a microSD card in the camera, which is a nice option. However, you won't have any of the cool remixing video features. Those are all cloud-based.

As for the FLIR cloud, you don't have to pay if all you want to do is access your recordings. Everyone gets unlimited storage, but only for 2 days if you're a free user. There are two paid tiers—Plus and Premium. Plus has 7-day retention and Premium has 30-days of history. These both also come with unlimited RapidRecaps, but you can only have three active recaps with the free service. Plus is $10 per month and Premium is $20.

Getting the FLIR FX set up is a breeze. You simply open the app and tell it you want to add a new camera. You use the phone's camera to scan a barcode on the bottom of your FLIR FX to connect it to your account and get it attached to the WiFi network. 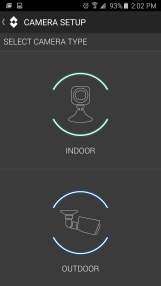 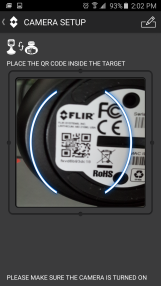 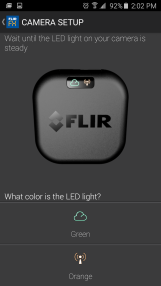 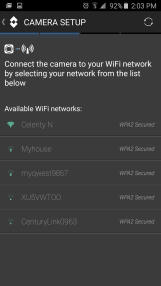 The 160-degree field of view is great—FLIR FX can basically watch an entire room if you place it in a corner. Night vision mode flips on reliably and illuminates any indoor space quite well. The outdoor enclosure apparently has a few more IR lights to give you about 65 feet of visibility. I don't have one of these to test, but I'd believe it considering how good the standalone camera is. One other thing to note about the outdoor case, it doesn't change the operating temperature range of the FLIR FX. It's still not supposed to be used below freezing, according to the datasheet. That's kind of a bummer for those of us who live in colder regions.

The app seems good overall. It loads the live feed very quickly and video quality is solid. RapidRecaps are insanely cool and useful too. There are ample options in the app including an intercom, quick snapshot button, and easy access to toggles for sound and motion triggers. You're going to use those a lot, unfortunately. My biggest issue with the FLIR FX is that it's way too sensitive. 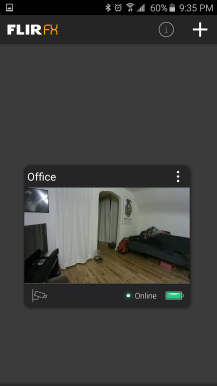 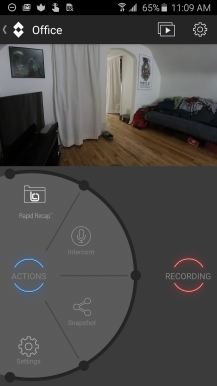 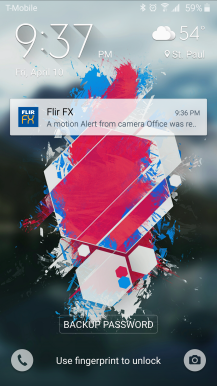 Even with the motion sensitivity turned all the way down, the camera "detects" motion every few minutes. I might get two or three notifications of motion in a completely empty room each hour. Some of the early user reviews mention this as well. I reached out to FLIR to see if this was a known issue, and they claim to be working on firmware updates that will improve the experience. In the meantime, they point out that RapidRecap makes it easier to review your footage, even if there are a bunch of false alarms. I mean, sure, but that doesn't do anything about the constant notifications.

I'm also a little bummed there's no web functionality for FLIR FX yet. All your interaction with the camera and recordings happens on Android devices. This is another thing FLIR is apparently working on.

I'm left with the impression that for $200 I'd like the product to be a little more fleshed out. FLIR FX has a ton of potential, and it includes hardware features that the competition doesn't have (local recording, battery backup, and so on). It's great in theory, but in practice it still needs work on the software side. 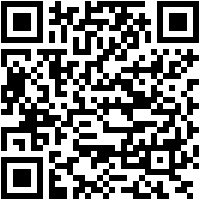