Magically uploading every photo you take on your phone isn't a new feature these days. The major cloud storage providers all prompt you to fill their servers with shots of your lunches, vacations, and nudes. Now you can add Flickr to the list with the release of version 4.0.

Except this isn't actually the first time Flickr has announced the new feature for Android. The feature originally known as Auto Sync is now named the Auto-Uploadr (those pesky e's). Okay, it isn't just a rebranding. You now have the ability to automatically upload videos as well.

This move coincides with the launch of Uploadr for Windows and Mac. You can use Wi-Fi or cellular networks, and images are private by default. This is the first thing Flickr will show off as you fire up the latest version. 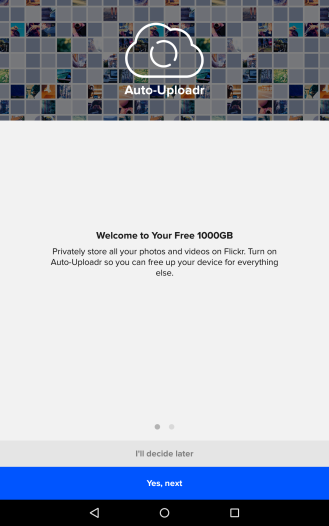 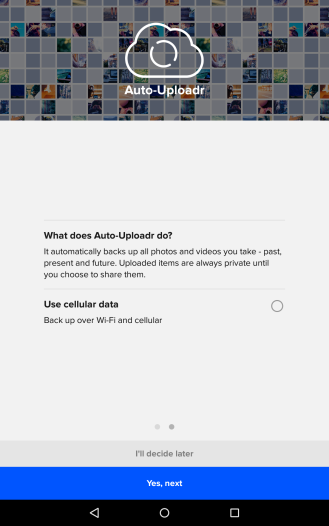 After that, your eyes will fall upon a refined interface. Flickr has brought in a timeline view with more fluidity. Photos will still appear in a grid, but they're a little less uniform.

Images you upload will go to your Camera Roll, Flickr's new way for you to manage all the photos in your account across platforms. 4.0 will let you tweak your photos directly from there. You can crop, add filters, and apply other tweaks. Then you're free to share them with your loved ones or the world. Well, except for those nudes.

Google Says That Android 5.1 For The Nexus 9 Is Coming Today