We've seen some of this functionality already - consider Chromecast's guest mode. The device can use ultrasonic sounds (picked up using your device's microphone) to connect to your device. We've also seen things like "trusted devices" and "trusted places" make their way into Android's smart lock options, which also seem to reflect the functionality behind Nearby. Then there were those fun illustrations in Play Services for Copresence, an ostensibly related functionality that would give users a sort of cross-platform version of Android Beam's functionality. And of course we've also seen Nearby a couple of times in Play Services, but only in brief glimpses.

Outside of these sightings, all has been quiet. But the Google I/O schedule for 2015 still has a few hints to give up. There's a session called "Proximity-Based Communication" which will discuss "new technology for discovering and communicating with devices nearby."

Of course I/O session descriptions don't generally give up much new info until after all has been revealed in the keynote, but there's another interesting tidbit here. 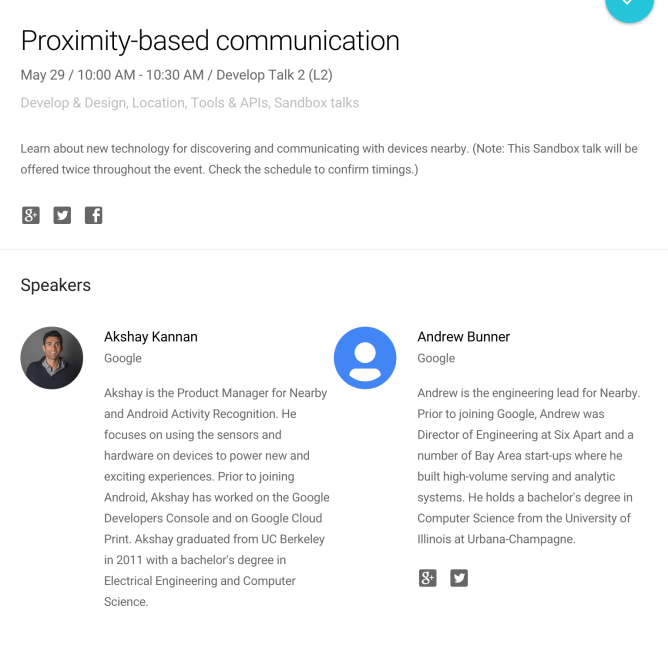 The speakers for the session are Akshay Kannan and Andrew Brunner, Product Manager and Engineering Lead (respectively) for "Nearby." So it seems that - in some small way - the schedule has acknowledged the Nearby effort. Here's hoping that the functionality materializes more fully at I/O 2015, which is looking more exciting by the minute.

FYI: Signing Up For Project Fi Kills Your Google Voice Account, But You Can Have It Back If You ...