The official schedule for this year's Google I/O recently went live, and we're poring over the upcoming events with eager excitement. As one commenter was quick to point out, it looks like Android M will make an appearance at this year's conference. There's a direct mention under the Android for Work event scheduled for 2:30 PM PST on the 28th.

The presence of a What's New in Android session (1:00 PM) is also a tip-off. Google usually uses takes this opportunity to discuss what's debuting in the freshly unveiled version of Android. Less than 10% of Android users are currently running the latest version, but as far as Google's concerned, we have to keep moving forward.

Android L was announced at last year's Google I/O, and a developer preview was subsequently released. The official name (Lollipop, you guys) and over-the-air updates didn't arrive until Fall. If this year is a parallel, that leaves plenty of time for us to place bets over what the next version will be. Android Macaron, anyone?

Oh, Google. The Android for Work session has already disappeared from the schedule. Here's a larger screenshot, for posterity. 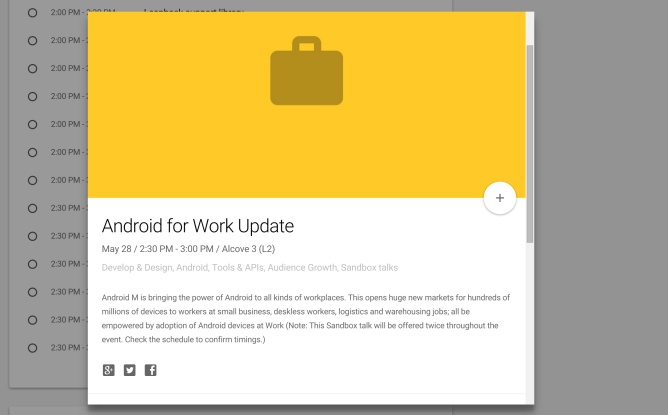