The Nexus 9 is not the most beloved Nexus device ever made. Its build quality is a bit questionable (people don't call it the Flexus 9 without good reason), the price is a little on the high side, its performance leaves something to be desired, and it hasn't had the best track record with updates. With these issues it's possible that Google is sitting on a fat stack of these tablets that it hasn't been able to unload.

Until now that is. You see, Google has a trick up it's sleeve that's sure to help relieve their Nexus 9 overstock problem faster than a Snapdragon 810 overheats. Those nefarious geniuses have pulled a fast one on all of us. Let me show you how. Check out the product listing on the Google Store for the Nexus 6. 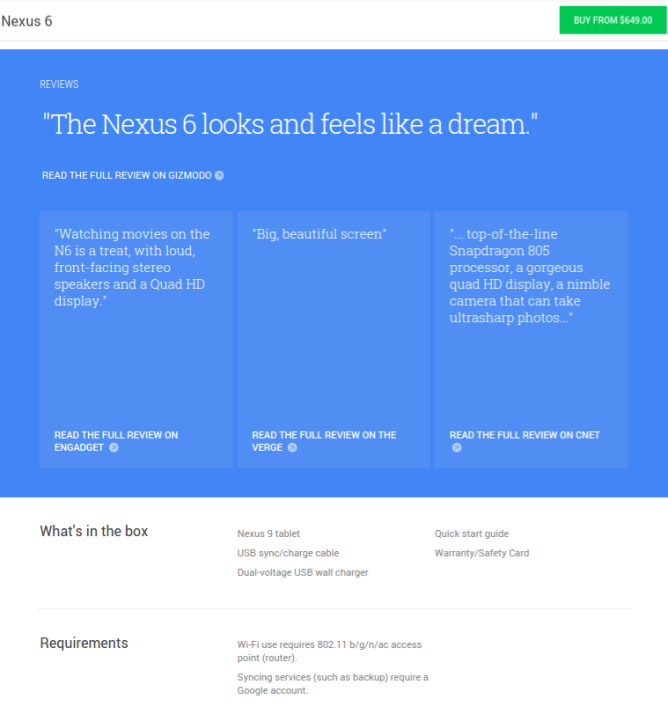 Did you spot anything odd? No, it's not that they have quotes from Engadget, The Verge, and CNET but nothing from Android Police. Look again, and this time, pay special attention to the 'What's in the box' section. Now you've spotted it! If you order a Nexus 6 you will instead receive a Nexus 9! Oh Google, you sly dog.

I imagine most customers will be pretty upset when a $400 chunky tablet arrives in the mail instead of the $650 super-phone they were expecting. However, I do wish I could be a fly on the wall when a guy who has never seen a Nexus 6 in person unboxes the Nexus 9 instead. I can just imagine the look of confusion and shock on his face, and I can almost hear the words, "Dang, they weren't kidding when they said it was big."

The Nexus 6 isn't the only product that has been subjected to a product switcheroo. Just take a look at the page for the Moto 360.

Whoops. I don't think that custom strap you ordered for you new 360 is going to fit now. But hey, the Nexus 9 might be the most versatile Android Wear device yet. I mean, just think about it – It's the first AW watch that has speakers, plays Youtube videos, and can double as a wall clock. Bonus!

I checked all the other products in the Google Store and couldn't find any others that are part of the great Nexus 9 con of 2015. Unfortunately, if you order a Nexus Player, you will still receive a Nexus Player. Bummer, that would have been a definite trade up.

Ok, now that I've had my fun, let me tell you something. We know this is just a mistake made by some underpaid intern who got a bit mixed up with his copying and pasting. But can you blame us for having a little fun at Google's expense?