We first saw Ultraviolet, Google's Hangouts app for Chrome, back in August. Just a couple of months later, the app went live for Chrome users with an interesting new chat heads-style interface that put your Hangouts conversations on top of everything else as floating circles.

For the most part, Ultraviolet currently resembles the Android app - it's got green toolbars, and a one-at-a-time approach to viewing conversations or the conversation list. Plus on OS X, the floating buttons unfortunately still aren't transparent, so the whole app is wrapped up in a window.

According to Caschy's Blog though, Google might be testing a new interface for Ultraviolet, and the image posted there looks like a step in the right direction. 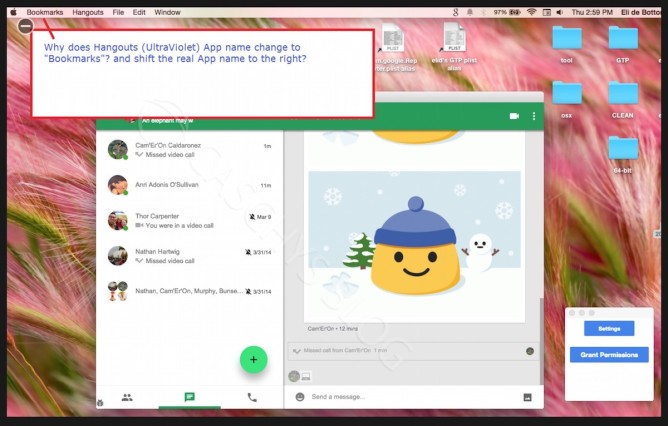 According to the post, the image came from Google's issue tracker, a notorious source of accidental leaks. The issue has since been hidden, but Caschys managed to keep the screenshot above, showing what is probably the new Ultraviolet layout. You may notice the bug icon in the lower left corner.

The interface shown in the screenshot has two panes, one for all conversations, and one for an individual conversation, along with a FAB for creating new messages. The tabs for contacts, messages, and calling have meanwhile moved to the bottom of the conversation list.

We can't be sure when or if this layout will become final (I/O is right around the corner) but it's undoubtedly a sight for sore eyes, and lends some hope that the Android app might get similar attention in the future.