The people who brought you HDHomeRun, a set of cable tuners that allow you to watch television on devices other than your base TV, are now close to bringing a DVR to market. With over $100,000 pledged on Kickstarter, they have now reached their funding goal to release this new, more practical product. 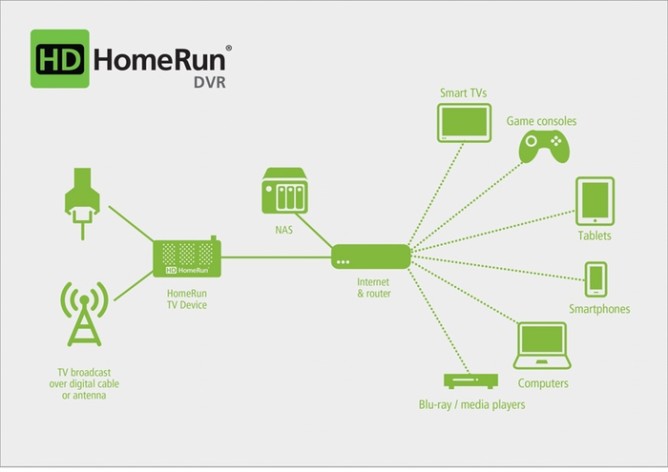 Previous HDHomeRun products simply allowed you to stream whatever was on your TV live to other devices, like Android tablets or game consoles, on your home network. This limited the potential of the products since many people are happy to sit in front of a particular TV if they are free when a program airs. More people want a way to watch TV on demand and that's where the DVR comes in.

You need three things to use the DVR:

Wait, where's the DVR? Well, it's really just software. You run the DVR "engine" on either a media PC or network attached storage device, where your recordings will be kept. The advantage here versus your own approach is that it will play nicely with the HDHomeRun tuner and you don't have to sort all the stuff out yourself. Their version will come with a nice-looking channel guide and the like.

So far, their plan is to have the recording software run on Windows, Mac, Linux, Western Digital NAS, and QNAP NAS. The viewer software will work on Windows, Mac, and Android, with stretch goals for iOS and Kodi (formerly XBMC) support. Android TV will be supported, per the FAQ. This will only work in the US, Canada, UK, and Australia.

The last bit of pertinent information is that the software will cost $30/year to use. While I can already hear the collective groan, you should look at the costs for subscribing to TiVo or your local cable provider's DVR package.

They expect to start delivering the service to backers in August 2015 and to the public in September 2015.

Namco Continues To Not Give A Crap About Tekken, Releases Galaga: Tekken Edition To Prove It