It looks like after years and years of lethargic updates, Android manufacturers are finally starting to recognize the value of speedy upgrades (at least for flagship models). Case in point: the Galaxy S6 Edge launched just a few weeks ago with Android 5.0, and at least one version is already getting a 5.1 update. The T-Mobile version, specifically - SamMobile reports that some owners are seeing the update as of today, including one who posted the updated software to YouTube. 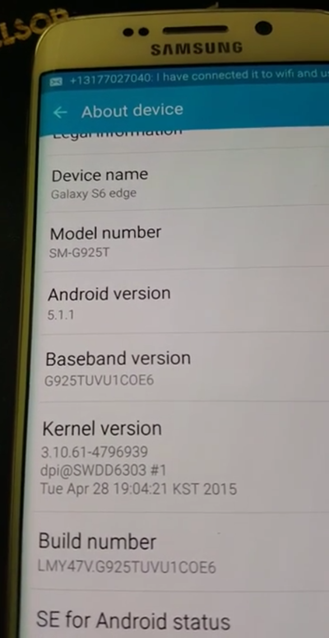 For the record, it's been just six weeks since Google uploaded the open source code for Lollipop 5.1. While it's nowhere near as big a jump as 4.4 "KitKat" to 5.0, it does fix a ton of bugs from the initial Lollipop release and refine a lot of the user interface changes. Samsung's TouchWiz (or whatever they're calling it this year) has a new version on Android 5.0, but that has more to do with the new hardware generation than anything else. That said, SamMobile also says that Samsung has implemented guest mode starting with the 5.1.1 update.

Considering how close the S6 Edge and the garden variety Galaxy S6 are in terms of hardware and software, I wouldn't be surprised to see updates for both of them head out to carriers and international models over the next few weeks. That makes Samsung the first company to get 5.1 up and running on its devices, excluding Nexus, Android One, and Google Play Edition hardware. If you've already rooted or otherwise modified your Galaxy S6 Edge, you'll need to track down a stock image to flash beforehand - remember that as of Android 5.0, significant software mods will cause over-the-air updates to fail.

Anonymous Sharing App 'Secret' Is Shutting Down, Probably Because People Are Horrible