It might surprise you to learn that the Android Police staff does not work on a series of networked Chromebook Pixels connected to Google's sentient God-Cloud. Nope, most of us use Windows for daily posting and other general tech stuff. So it's awfully interesting that Microsoft is making a push to bring Android apps to its various Windows platforms starting with the upcoming Windows 10. At today's Build 2015 developer keynote, Microsoft said that devs will be able to "reuse nearly all the Java and C++ code from an Android phone app to create apps for phones running Windows 10.” 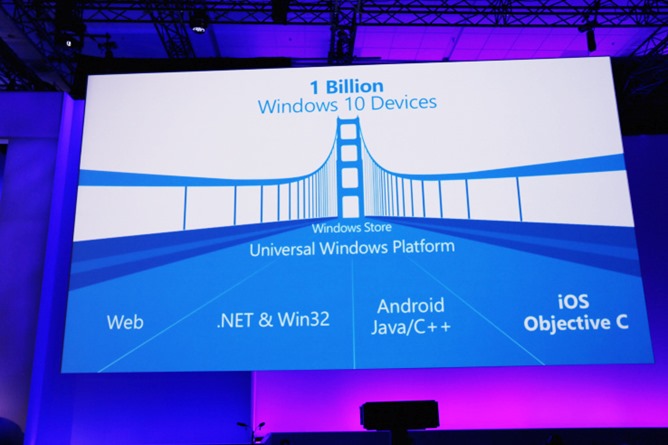 That would be a huge win for Microsoft - Windows Phone is limping behind Android and iOS, due in no small part to a lack of available apps. Microsoft demonstrated the super-popular casual game Candy Crush Saga running on a Windows phone during the presentation. And thanks to the company's cross-platform focus with Windows 10, it's probable that apps for the phone would be able to run on a full-sized tablet, laptop, or desktop with little to no adjustment. Microsoft also stated that a new version of Visual Studio would allow iOS apps based on Objective C to be published for Windows with little effort. Windows 10 should be available sometime later this year for x86 desktops, laptops, and tablets, with a phone launch expected around the same time.

Of course, giving developers the tools to easily create Windows apps and seeing the benefit are two different things entirely. Android apps can run on Blackberry's BB10 operating system, and in fact the Amazon Appstore comes pre-loaded on some models... but the Canadian company hasn't sprung back from its single-digit marketshare. Don't forget that Google is making some forays of its own into cross-platform Android apps: Chrome OS can now run Android apps in a limited capacity.

HTC Gets INK All Over That One M9 You Wanted, Calls It A Limited Edition Work Of Art