Not too long ago, I took a look at the Griffin iTrip AUX Bluetooth dongle. It was a solid product that delivered on its goal of allowing people to connect over Bluetooth in cars that don't have the functionality built-in. But at $49.99, it's a little on the pricey side. For that cost, you can get a Kinivo BTC455 that not only delivers the same capability, it supports two devices at once, hands-free calls, and controlling music playback. Frankly, it's more bang for buck.

That said, after trying out the Kinivo BTC455, I occasionally longed for the Griffin iTrip AUX. Let me tell you why.

Kinivo offers two models, the BTC450 and the BTC455. The latter costs more, but it's able to simultaneously connect to two devices at once. This is a pretty cool feature that I'm going to come back to.

Both models consist of three primary parts. There's the plug that goes into your 12 volt outlet (on the back of which is a USB port to charge your phone), the attached 3.5mm aux-in cable, and the circular control knob. That last part comes with a circular adhesive pad that will enable you to stick the piece wherever you would like... sort of. More on that later. 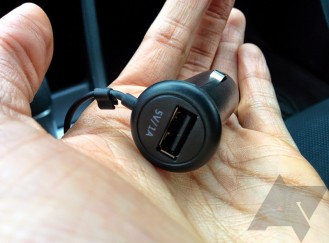 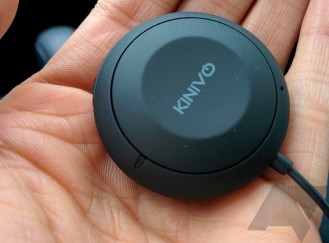 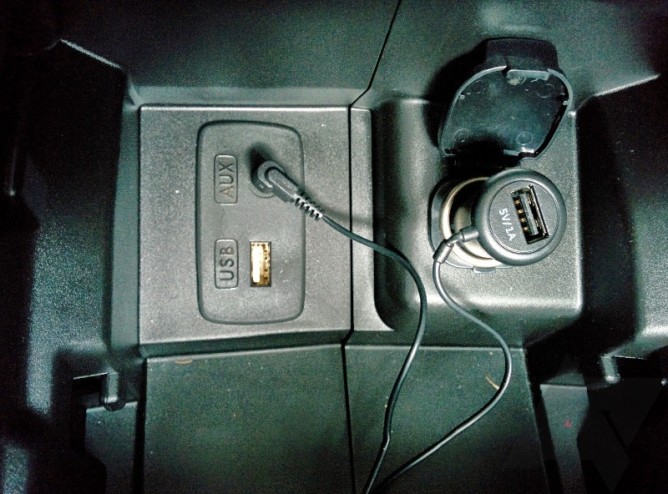 Connecting to the device is simple. When you first turn it on, it automatically goes into discovery mode. This is indicated through the alternating flashing blue and pink light on the control knob. At this point, you can connect through your phone's Bluetooth menu as you would any other gadget, and you don't have to fiddle with any codes.

To pair another device later on, just hold the primary button on the control knob down until the light starts flashing blue and pink again. Once you connect, this light will only flash blue. And it won't stop flashing. Ever. Not until it's dead. But again, more on that later.

When you hop in the car, the Kinivo BTC455 automatically connects to your last paired device. From there, you can use the device to stream music or make calls.

The entire front of the knob is a button you can use to play or pause songs. To go to the next or previous track, there's another button spread across the top. Since my car lacks a play/pause button (Subaru designed it for me to turn the radio off and back on to achieve the same effect), I like having this knob at hand. It's better than fiddling with the buttons my car manufacturer provided. 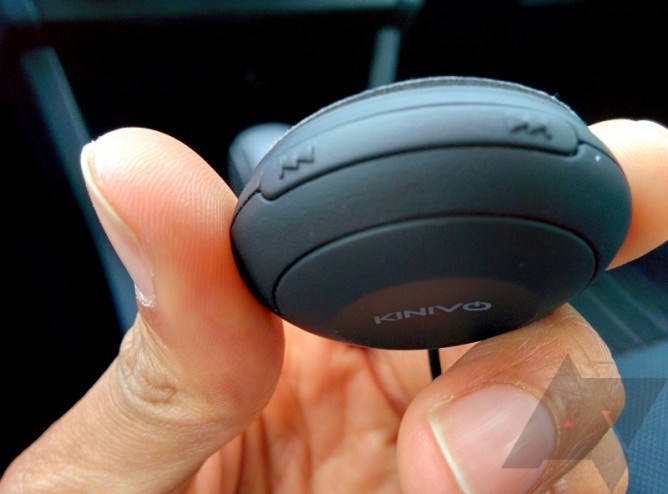 You can double-tap the main button to initiative a phone call to the last person you talked to. The people I called said my voice came in loud enough to maintain a conversation, but the quality wasn't quite up to par with my car's built-in Bluetooth. I found that I had to repeat myself more often than I was used to, but the experience was good enough where it wasn't otherwise obvious on my end that I wasn't placing calls using my usual system.

If you regularly share vehicles with someone, the BTC455's Bluetooth multipoint support is where it's at.

If you regularly share vehicles with someone, the BTC455's Bluetooth multipoint support is where it's at. The device lets either of you hop behind the wheel and take the car for a ride without having to repetitively set things up. It also lets your passenger play music without having to reach for an aux cable. Unfortunately, the process of pairing a second device involves power cycling the product, so it's not as useful for casually letting friends connect to Bluetooth. But when you do have two devices set up, pausing one and hitting play on another without any fuss is a great experience.

Overall, voices came through my speakers clearly, as did audio in general. On these crucial points, the Kinivo BTC455 delivered. It's just too bad the story doesn't stop there.

You see, all three of the Kinivo BTC455's components are connected by cords. This means that if you're keeping the controls somewhere visible, you're going to have to deal with a degree of unsightly dangling. This isn't a problem unique to this device, but as you're about to see, it's still not easy to overlook. Depending on your vehicle, it may just turn the product into a non-starter.

Both my 12 volt and aux-in ports are tucked away in the center storage compartment under the armrest, which is great for something like the Griffin iTrip AUX Bluetooth. I could tuck it out of sight and be done with it. With the Kinivo BTC455, I have to find a place to stick the controls. There's no spot near my dashboard that I feel works particularly well, but even if there were one, the cord would still drag across both of my cup holders and the gear selector. 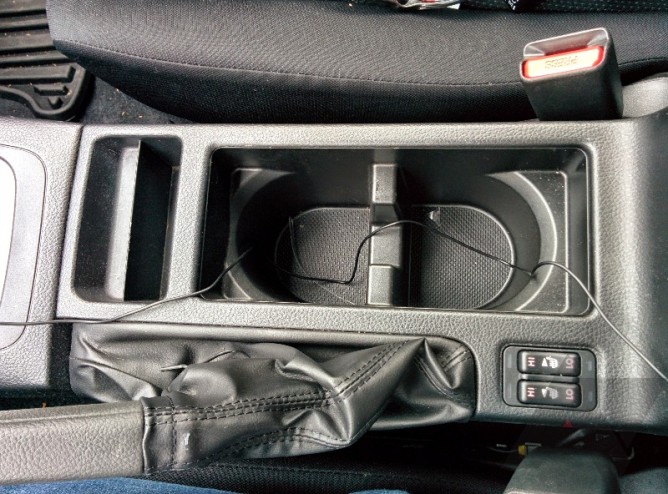 Since there's an adhesive sticker involved, it's impractical to only take the controls out when needed. So you may have to put some extended thought into finding a location in your car that works best. I found that it wasn't nearly as simple as it seemed. But again, this has a lot to do with the layout of my car. One option is to never apply the sticker and opt to use the circle more like a remote instead. Even if your car has the perfect location for all the parts, this approach is still worth considering. Let me tell you why. 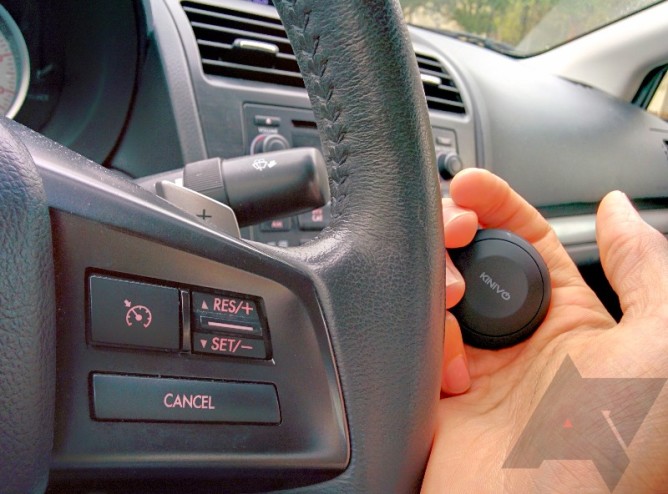 That blinking blue light. It's tolerable in the day, but at night it's a persistent nag that serves no purpose. Yes, I know you're there. Yes, I know my phone is connected. Yes, I know it's streaming. Please stop flashing now. Please?

To get around the flashing light, reduce the amount of cable clutter, and keep the controls within reach, I ended up sticking the remote upside down just outside my armrest storage compartment. This managed to remove most of my complaints about the product, but even here the flashing light manages to creep into my peripheral vision from time to time.

This depends on your answers to a few questions. Would connecting two devices at once make your life easier? This is a cheap way to make it happen. But first, do you hate having cables stretched across your car? What about blinking lights? If your answer is yes to either of these, the Kinivo BTC455 is going to give you a decent amount of headache. Still, with enough ingenuity and the right vehicle, you may be able to arrange things in a way that doesn't pluck your nerves. Under those circumstances, the product works well, and you will probably be satisfied with your purchase.

Do you hate having cables stretched across your car? What about blinking lights?

You can get a Kinivo BTC455 unit from Amazon for $49.99. Or you can get the cheaper unit for $34.99. Which one you go for really depends on your needs. Since my wife and I ride together often, being able to sync two devices at once is worth the extra $15. And it might be a difficult thing to give up once you get used to it. But if you do most of your driving alone, meh, the pairing process is simple enough that connecting devices one at a time really isn't too much effort.

Now if only the controller were wirelessly connected to the rest of the product by Bluetooth. That would be something.

LG Watch Urbane Is Now Available In The Google Store For $349, Shipping To The US, UK, ...