Well, maybe not your patent in particular - odds are pretty good that they're only interested in technology and software patents, and even then, only so that some fly-by-night LLC with a dozen lawyers and no physical address won't sue them in the future. For a limited time, Google is opening the floodgates and allowing anyone to submit their patents and a price for same to the monolithic technology company, after which they may or may not receive a purchase offer. It's kind of like an open casting call, but instead of grabbing a hundred extras for an action scene Google is looking to bulk up its patent portfolio. 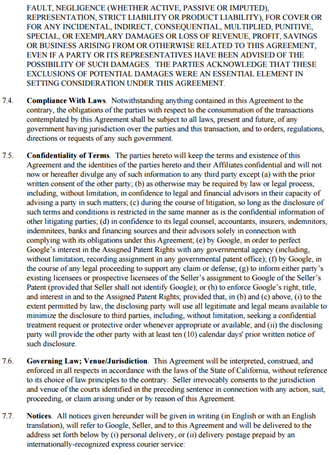 I'd watch that movie.

Submissions will be accepted at the Patent Purchase Program between May 8th and May 22nd - a fairly limited window for would-be patent sellers. Google will notify owners of potential offers by June 26th. Submitting a patent is confidential (or at least it's between you, your lawyers, Google, and Google's lawyers), and a submission comes with no obligation for you to sell or for Google to buy. Whether or not it's worth it depends on how valuable you think your patent is and how much the company is willing to pay.

Make no mistake: this isn't some altruistic move to reform the patent system. Google is probably just looking to save a lot of potential lost revenue in the future. Once you sell to Google, you lose all rights to the patent that you formerly owned - it's no different from any other patent transferal. Google is simply opening up the fairly ubiquitous process of patent acquisition to a huge potential field, at least for a limited time. You can read more about the program, including dozen pages of legalese, over at the Google Patents Site.