Facebook Messenger is adding a feature that, if you didn't use it, you would expect to already have. With today's addition of video chat capability, it has parity with the desktop chat interface that has long supported this. As a server-side switch, you should have this available so long as you are using a reasonably new version of the app.

As you see in the image above, there is a camera icon at the top of the conversation that will initiate the video chat. You might also notice that Facebook is very proud that iOS and Android devices will be able to communicate with one another from the start. In terms of being able to request a video session, the app will be more or less platform-agnostic. The key to look for in terms of whether you can do it is the color of the icon. Gray means the recipient is not available, but blue means they are ready to roll (but still have to accept). 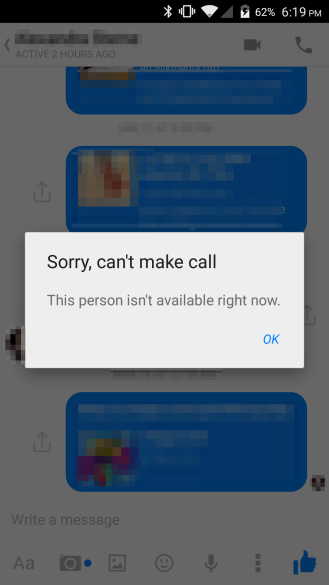 Calling, whether with voice only or video as well, is free. With that said, there is no better way to chew up your mobile data allowance, so use with care if you aren't connected to Wi-Fi. And if you weren't sure whether Facebook was all that serious about Messenger, here is some good evidence that they really want you using it for most of your communication.

While this feature clearly adds competition for Hangouts, I see Skype as the likely big loser here. Those who chat over Hangouts probably don't ever chat on Facebook. For many, though, Skype's only purpose is acting as a video chat platform for people with whom they are already Facebook friends. It's just redundant, now, if it wasn't already.

LG Watch Urbane Is Now Available In The Google Store For $349, Shipping To The US, UK, ...