Over the last couple of years, both Barack Obama and Vladimir Putin have attracted worldwide criticism for the actions of their respective administrations - Obama for unwavering support of sweeping and unconstitutional surveillance of US citizens and allies, and Putin for "secretly" invading a neighboring country and killing a whole bunch of people. But you can say at least one thing in favor of them both: they haven't tapped into dimensions of eldritch power to raise a monstrous army of undead Soviet soldiers.

Not yet, anyway. I honestly wouldn't put it past Putin.

In Wrath of Obama, the latest magnum opus from developer Ankaar (of Fuhrer in LA fame), the leaders of the United States and Russia join forces to oppose Vladimir Lenin. The OG Commie has risen out of Hell and has brought thousands of soldiers from the Soviet Union with him, intent on world domination. In a combination of top-down space shooter and lane-based strategy gameplay, you'll use both Obama (riding a horse and armed with a giant Smith & Wesson) and Putin (riding a bear and armed with a rocket-propelled grenade) hero units to take on the Red Dead Army. 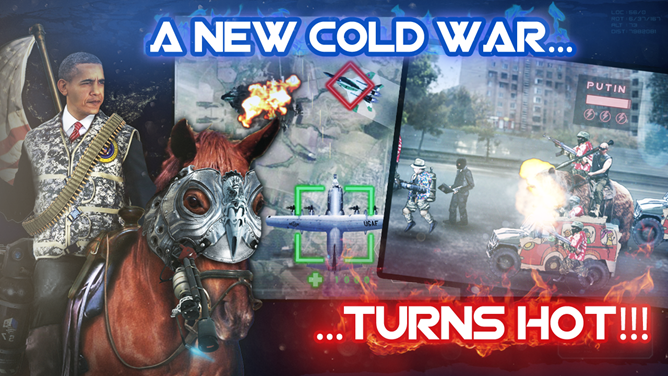 The satirical game actually has a story, made up mostly of laughably bad Photoshop stills and political impressions that are authentically awful. Wrath of Obama is a very reasonable $1.20 (or approximately 60 Rubles) in the Play Store, with no in-app purchases. Sol Republic Shadow Review: Bluetooth Headphones That Do Just About Everything Right